In October 2007, Rhona and I took a holiday in Sutherland, (the North of Scotland).  Whilst doing some research for the holiday, Rhona came across the waterfall “Eas A Chual Aluinn”.  At over 200m, this was the highest waterfall in the UK, and was located within an hour’s drive from where we were staying.

There were 2 routes in.  The first was a 4km walk in, but looking at the map, the path didn’t look too “blind friendly”.  The other option was to kayak in from Kylesku.  This would be around a 7km paddle, on a sea loch, and was much more appealing to us both.  So this was the route we took in. 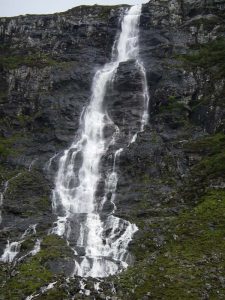 I have a bit of a thing for waterfalls.  I don’t know if it is the sound of a waterfall, or just the immense force they have, but whatever it is, I’m a bit weird that way.

Anyway, when we arrived at Eas A Chual Aluinn, I was not disappointed.  However, instead of just admiring the whole thing, the only thing I could think of was “I’d love to abseil that!” 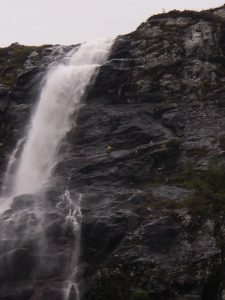 Look carefully and you will see Ben dead centre

In June of 2009, a very good friend, Ric Kirkup, and I went up to have a good look at the falls.  He is a very experienced outdoorsman, and I knew that he would be able to say whether it was possible or not.

We spent around 24 hours in the area, walking in on the Friday night, sleeping at the bothie overnight, and then walking back out on the Saturday afternoon.  3 things were learnt on this visit.  The first was that the abseil was definitely possible, and the second was that I was not going to “walk in” again.  Due to the terrain and my bad eye sight, I spent most of the walking, falling, staggering, tripping, etc.  By the time I got out, my legs and feet were in a bad state. 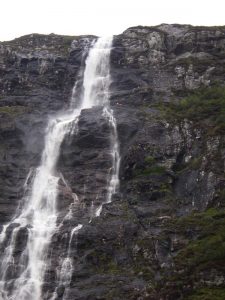 Ben below and Deano and Graeme on the ledge

The third thing we learnt, was that it would not be an easy abseil, and that I would need to get some specific water and ropes training in.

I then spoke to John Mason-Strang at Nae Limits, (who has helped out on several of our previous adventures), and he recommended Ben Starkie from the Vertical Descents outdoor centre in Fort William.  John reckoned that Ben was probably the top guy in the country for this sort of challenge, as he trained the pros.

A few weeks later I met up with Ben, and we went out on a training day.  We started with some basic rope skills, and then went on to play in the water.  We abseiled, slid, and scrambled down several waterfalls, and even ended up hanging upside down in one, just to get the feel of what it would be like, and learn how to right myself if this were to happen for real.  All in all, a fantastic day! 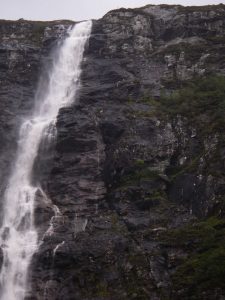 Ben below and Deano and Graeme on the ledge

At the end of the day, we discussed Eas A Chual Aluinn, and he offered to come along on the trip.  Perfect!  I spoke to Ric, and he thought that would be the best thing to do, as Ben was the best guy for the job.  Ric said he preferred to climb up frozen waterfalls, than abseil down wet ones. 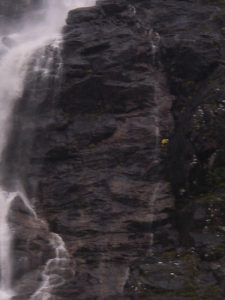 Ben half way up just to right

On the morning of the 5th of September, we all met up at Kylesku.  The team was, Ben Starkie, Carrie Reid, (now Carrie Starkie), Graeme Reid, (Carrie’s brother), Rhona, and I .  (Oh yes, and don’t forget Hendrix and Stumpy, the 2 dogs.)

We loaded up the boats, and a couple of hours later, we were all at the bothie.  This was the first chance that the rest of the team got to see Eas A Chual Aluinn.

There had been some major flooding over the previous 3 days, and now the waterfall was massive.  It was much wider and nastier than when Ric and I had checked it out in June.  It was looking so big, that Ben wasn’t sure if it was possible to abseil. 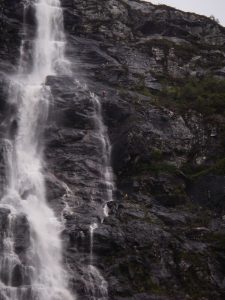 After sorting our kit out, we headed on up to take a look from the top.  Carrie, Rhona, and the 2 dogs, stayed in the valley with the cameras, and Ben, Graeme and I went on up with the kit.

When we got to the top, Ben noticed a sharp rock sticking out on our route down, and was concerned that this may damage the rope.  He took a quick abseil down and checked it out.  We should be able to bypass that rock, if we were very careful. 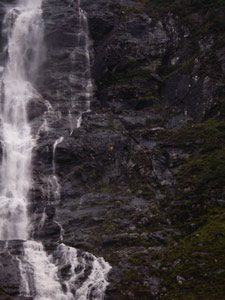 Ben with Deano to his left with Graeme on the ledge

The whole abseil was to be done in 3 stages.  On each run, Ben would go first, then me, and Graeme would come down last.

I’d love to describe the whole thing, but to be honest, the pictures do a much better job than I ever could.  However, I will tell you this: my main memory of the abseil is that due to the strong winds, one minute we’d be abseiling down the edge of the waterfall, and the next we’d be right in the middle of it.  It wasn’t that we were getting blown around that much, but more a case of the river that fed the waterfall was changing with the wind.  There would be a steady flow, and then the wind would blow a mini tidal wave downstream.  This meant that the volume of water coming over the edge felt like it trebled, and we were right under it! 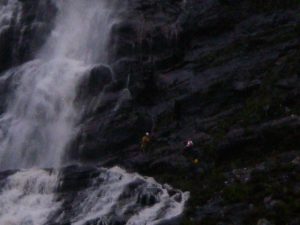 All three in centre with Graeme just to the right

What made it even better, was the fact that we were the first people ever to abseil Eas A Chual Aluinn.  Ben spoke to all the relevant people, and couldn’t find any record, or knowledge of anyone ever having done it before!!

The Eas A chual Aluinn trip was such a success, that we are now planning our next joint adventure for 2010! 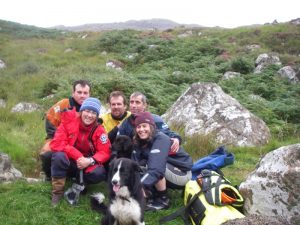