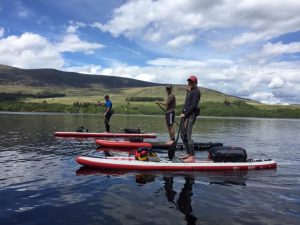 After last years’ great paddle with the Nairn Academy Duke of Edinburgh Silver Awards SUP expedition group, I was delighted to be invited back again this year.
Last year the venue had been Loch Laggan, and the group was made up of 7 youngsters, plus Kirstin, Jordan and myself. This year we were back at Laggan, but with 2 groups, totalling 13 youngsters, and as well as Kirstin, Jordan, and me, we were also joined by my wife Rhona, and Johnny Freshwater of Loch Insh Outdoor Centre. 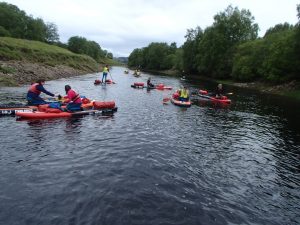 Another variation on last year was that instead of finishing at the end of the loch, this year we would be adding on another 7km, by paddling out of the loch, and down the river to the dam. 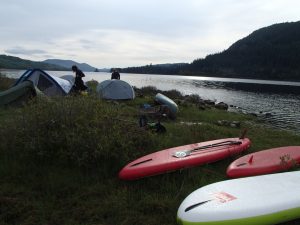 Day 1 ended with us camping in the same spot as last year, but unlike last year, we did not have the camp site to ourselves. We were joined by millions of midges!
Day 2 saw us reach the end of the loch, and then paddle down the river to find our camps for the night. While the youngsters settled for a small grassy ledge above the river, the 5 of us paddled a little further downstream and located a camp site at the top of a wee hill. Hopefully if there were any midges, this exposed hill top should have a steady breeze. 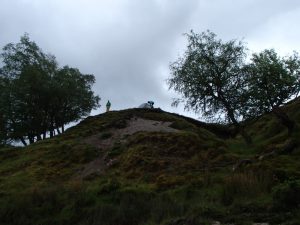 There was no breeze. So, the following morning it was a mad dash to pack our kit, eat my cold porridge/midge mix and get moving back to the others, who had had a similar experience to us, and were ready to rock and roll ahead of time.
Day 3 saw us paddle down to the dam, in a mixture of drizzle and occasional sunshine.
At the dam, we formed a human chain, to pass the kit up to the vehicles, before paddling around the corner and then carrying the boards up from the water to the car park. 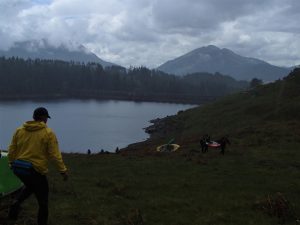 There were several challenges along the way, one of these being some of the groups’ first real taste, (literally), of midges. Another challenge was for one of the girls, Evie. She was supposed to be paddling a big tandem SUP with her friend, but the friend had pulled out at the last minute, leaving Evie to paddle the full distance on the big beast of a board, on her own. Not an easy thing to do!! Wel done Evie!
Kirstin kept the group motivated all the way, especially with the promise of fish and chips for them on the way back to Nairn.
Thanks for the invite. Rhona and I had a great time! 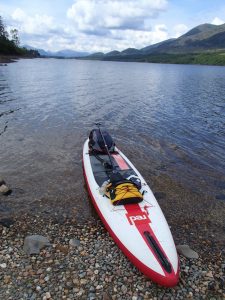