I bought my first stand-up paddle-board in April 2014. In the October I took on my first big trip, paddling 57 miles, (92km), along the Caledonian Canal from Fort William to Inverness, with my great mate Carl Sawyer, who introduced me to SUP, and his brother Jason. We did the paddle over 3 days in almost perfect conditions, no rain and the wind right behind us. Little did I know then that I would be back 2 years later, (almost to the day), and I’d be doing it in the opposite direction, non-stop.

The “UK SUP Great Glen Paddle Challenge” took place on the 15th of October 2016, and was put together after the organisers of the Great Glen Paddle pulled the plug a month before it was due to take place, due to lack of numbers.

There was a small group of stand-up paddle-boarders, including me, who had entered the race and were very sad to hear it had been cancelled. After some chat on social media, it was decided that the paddle would still go ahead, and Joanne Hamilton Vale, (one of the UK’s top race and ultra-long distance paddlers), and her husband Pete Vale, (both from UK SUP), picked up the reigns. Tom Wakeford, a local SUPer, set up a dedicated Facebook page, and others also got involved to make it a real team effort. 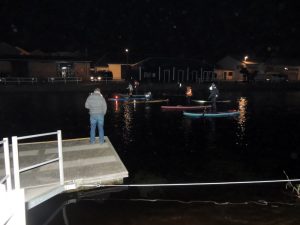 There would be 8 of us participating in the GGPC – 7 SUPers and 1 kayaker, Glen. As Glen was paddling a surf ski and would be faster than most of us, the SUPers would start at 03.30, and Glen would start 2 hours later.

I would be paddling with Allistair Swinsco as my guide again. As with the Bute paddle, Ian was unable to join us, so the “3 Amigos” were down to just the 2.

There was a briefing the night before the paddle, where Pete covered the route, safety, (making sure everyone had a tracker), etc. After this, everyone headed off to get some sleep. Rhona and I followed Allistair and Alison up to Inverness to get some sleep in our vans next to the start line. 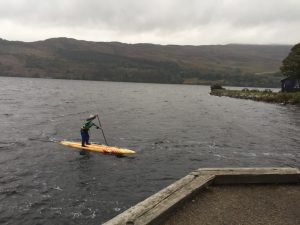 After prepping my kit, I was asleep by 10pm and awake again at 11.15. We hadn’t realised that the start line was next to a busy taxi rank, which on a Friday night seemed to be doing great business, going by the noise of the cars coming and going, door slamming, and drunken revellers arriving to get a lift.

That hour and a quarter of sleep was all I was going to get, and would play havoc with my already broken eyes.

At 03:28 the 7 SUPers lined up on the start line. Pete counted down, 2 minutes to go. Then, 1 minute, 30 seconds, 10, 9, 8, 7, 6, 5. It was then that I remembered I hadn’t turned on my Spot tracker. 3, 2, 1, everyone shot off across the start line into the darkness. Well, everyone except Allistair and I. We pulled into the side and spent the next 3 minutes digging out my tracker and starting it. Not quite the start we had hoped for. Sorry Allistair. 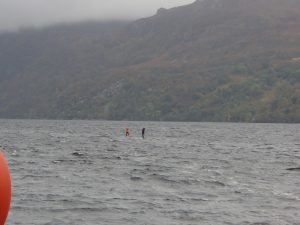 For the next hour and a half we paddled along the canal towards Loch Ness. We had to go under a very low bridge, which forced us to lie flat on our boards, (which I remember), and just before hitting the loch we had our first portage, (which I don’t remember).

As we entered Ness, the water started to get very lumpy. In the pitch black, the only thing we could see was the bright lights of Dores off in the distance to our left. Everyone had some sort of lighting on their boards, and for the next 4 hours I tried to follow Allistair’s red tail lights.

After an hour of paddling in these very lumpy and windy conditions, we decided it would be safer to kneel down and paddle. We did this for the next 2 and half hours, until daylight broke and we pulled in to Foyers to stretch our legs and take on some fuel. It was probably just as well that we had that break, as I had already had my first hallucinations, (seeing lights flashing where there weren’t any), and I had been trying to battle my way through this weird dizzy spell. (It took me 20 minutes to work out that this was just tiredness.) 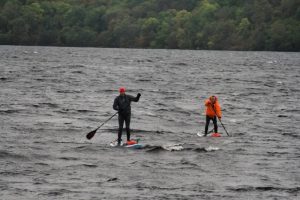 3 miles from the end of Ness I took a swim. I’m not really sure what happened, but I suddenly found myself running on the spot as my board passed under me, until there was no board. Splash!

At around 11 o’clock we arrived at Fort Augustus where we were met by the wonderful duo that is “Debs & Deano”, who forced bacon and egg rolls down our throats! (It’s terrible what you have to put up with!)

For the next couple of hours we paddled down the canal, across Loch Oich and on to Loch Lochy, where Commander Stumpy greeted with a sloppy face licking- What a welcome! (Oh yeah, Rhona, Alison, Leia, Debs and Deano were there too.) 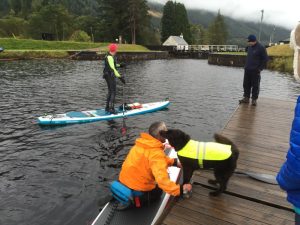 We were now entering the last loch, Loch Lochy. The first 4 miles were fine. By 5 miles it was getting lumpy and by 6 it was wild! I spent the last 4 miles sitting down and paddling, as I was still quite cold from my swim in Ness 3 hours earlier, and didn’t fancy a second. 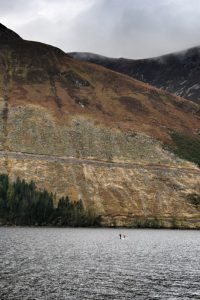 Out on Loch Lochy

As we reached the end of Lochy the light was getting dim, and I was struggling to see anything. We had our 5th and final portage of the day.

From here it was about 7 miles along the canal to the end. A few miles into this Allistair told me to line up with the middle of the arch in the bridge ahead of me. I asked him which arch, as I could see 2. Allistair assured me there was only one. Then 200m further on I saw the next bridge and asked Allistair how many arches there were in this one. He told me there was no bridge. Oh dear, I was getting tired again.

This last section seemed to go on and on, with no end in sight, (but a couple more hallucinations, seeing trees reaching out to me from the banking). Each time we rounded another bend, all Allistair could see ahead was yet one more. Also, the patchy rain that had been on and off all day suddenly came on very heavy.

Eventually we spotted Rhona ahead of us, and she told us we only had 100m to go. OK, it was actually 250m, but at the end of that we crossed the finish line. 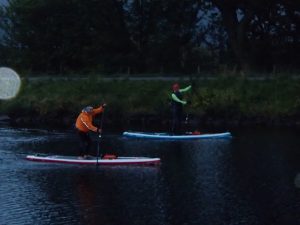 We had aimed to complete the paddle in less than 16 hours. When I paddled this route back in 2014, we had covered the 57 miles in 15 ½ hours over 3 days. Today we covered it all in one, with a finish time of 14 hours and 47 minutes. Taking all of our breaks out, our moving time was 13 hours and 59 minutes.

I’d like to point out that in the picture of Allistair and I on land after the paddle, that neither of us are pregnant. We both have our Palm Glide PFDs under our cags, and I had my gloves, hat, and spare pork pies in the Arcadia front pouch. That’s our story anyway!

Research seems to show that less than 20 SUPers have ever paddled this course – the UK’s longest non-stop course. I am the first registered blind person to do it, and Allistair, Tom, and I are the first to do it on inflatable boards, (all Red Paddle boards). 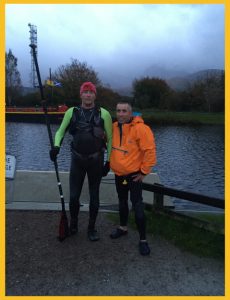 Jo also knocked almost 2 hours off her previous time, which had been the female record for this course. Bart De Zwart, one of the worlds’ top ultra-long distance paddlers, also set a new course record, knocking 27 minutes off the previous SUP record.

What an amazing group of people, (paddlers on the water and support crews off the water). Thank you to you all! Events are made by the people involved, and that is why this event was AWESOME!

This has been my longest and toughest SUP so far. There were times during the pitch black early morning, with the wind howling, the rain pouring, and whilst battling tiredness and hallucinations when I thought about giving up, but I couldn’t. As well as being a challenge in its’ own right, I was also using this challenge to see if I was anywhere near fit enough for my next BIG challenge next year – SUP 11 City Tour non-stop, 220km in under 35 hours. If I couldn’t manage the GGPC, there is no way I could even think about taking on the 11 City. I’m certainly not fit enough for that paddle now, but I am happy where I am, and with plenty of training, I hope to be fit enough when the time comes. Not only will I be doing the 11 City, but Jo will be my guide! She has completed it 4 times – twice each for the 5 day event and the non-stop. No slacking for me then!

I would also like to take this opportunity to thank Red Paddle Co and Palm Equipment Europe for their support in my SUP challenges.