This was not an organised tour.Whilst in Spain, earlier this year, I met up with “Our Boys on the Costa”. (Mark and Daryl Sinclair live in Benelmadena on the Costa del Sol.) As well as being my cousins, they are also into the adrenaline thing. Their sports include skateboarding, in-line skating and body boarding. Daryl has also been out exploring the local area with his mates, and that is how we ended up in this great place for a bit of canyoning. 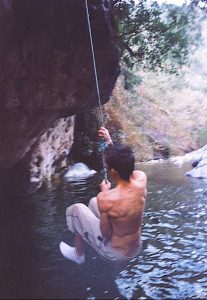 I cannot tell you any more about the location, apart from it is fairly close to Benelmadena. At the moment it is hardly used, and this is what makes it such a great spot! 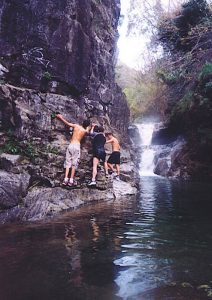 On arrival, we did a little bit of gorge walking to get to the first water jumps. The rocks were smooth and very slippery, so I spent most of my time trying to stay upright. Our first play area was really cool. We had been walking in the sun (which was very hot), and this first place was in the shade. It comprised of an overhang (over water), and a rope swing. The main thing to remember was to let go of the rope before hitting the overhang. I forgot about this, so took a good knock! A lesson quickly learnt!! 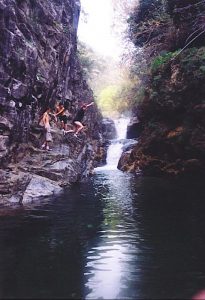 After playing here for a short time, Daryl led us up to the next section. This was a larger pool, with rocks on 2 sides and a waterfall flowing into it. The idea was to clamber along one of the walls and jump in. At this point, Rhona decided she was happy to stay in the water and take photos. Daryl, Mark and I made our way along the rock wall, to a jump point. Mark and I fancied going a bit further, but took Daryl’s advice and agreed to leap from here. We were only about 2 – 3 metres up, but we had to make sure we leapt as far out as possible, to ensure a safe landing. After doing this once, we had to go back for another jump. 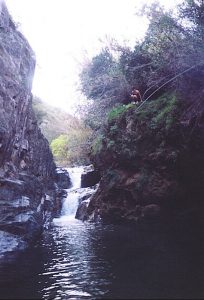 Whilst we were doing this, Daryl disappeared into the trees. The next thing we knew, he was around 10 – 12 metres up the cliff, and getting ready to jump. (Rather him than me!) Splash!! No problem!! 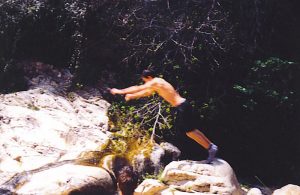 After this, we were off to the next spot. This was a plunge pool with a 10 metre waterfall flowing in. After swimming about in this, we went to the final play area. As well as jumping in from the rocks, there was a natural rockslide! Wicked!! Not content with jumping and sliding into the water, Daryl pulled off the “piece de resistance”. A dive from around 3 metres up (not so special), but having to clear around 3 metres forward, so as not to land on the rocks! Nutter!! 🙂 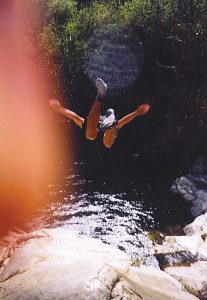 So thanks to Mark and Daryl Sinclair for an awesome day’s canyoning! You’ll find them at Sinky’s Bar in Benelmadena, Costa Del Sol, Spain. 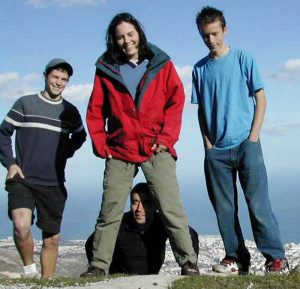 This was not an organised canyoning tour, with a canyoning company. It was purely a fun trip with my cousins, who have good local knowledge!