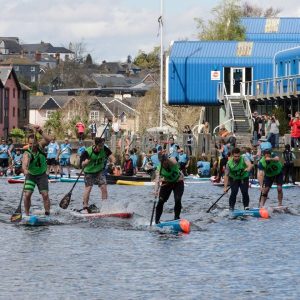 Social paddle? I think not!

Carl Sawyer is not just one of my oldest and closest friends, but he is also the guy who got me into stand up paddle-boarding.

In 2014 we paddled the 90+km Caledonian Canal from Fort William to Inverness, and in 2015 we paddled the 50km sea crossing from the Isles of Scilly to Cornwall.

Since then, we hadn’t done much paddling together, so now in 2018, it was time to remedy that.

Carl suggested we take on the “Head of the Dart SUP Challenge”, (HotD).

This was a much shorter paddle than I’m used to, and to make it more fun the kind folks at Red Paddle Co had leant us one of their 4 person Dragon boards. 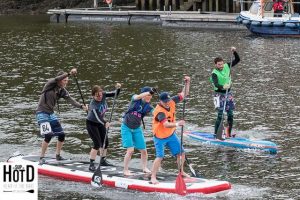 Our team, “Sync or Swim” – Carl, Carl’s wife Maria, Rhona, and I – hadn’t done much paddling over the winter, so we agreed that the HotD would be a social paddle. Nice and easy.

Due to bad weather, (wind and rain), the course had been changed from 8 miles in one direction to 3.5 miles up the river, and then 3.5 miles back again. No worries, this is a social paddle. 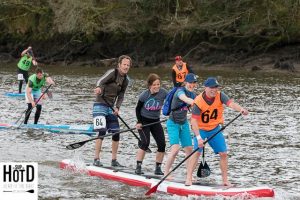 With 250 paddlers on a narrow river, and paddlers heading in both directions, this was a very different sort of paddle than I’m used to.

Although the starts were staggered, there were still a lot of people on the start line.

The first 5 minutes were full on, with us trying to keep our balance in this massively churned up water, as well as us battling our way through all the other paddlers. Carl was in charge of the steering and was taking no prisoners. (Apologies to Bryce.) 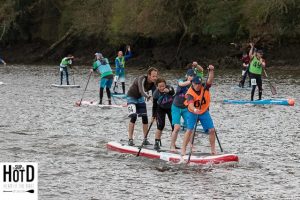 For the next 78 minutes, we raced up and then back down the river, with no time to do anything but paddle. With the forecast of wind and rain I had made the mistake of wearing my Palm rash t-shirt, with another thin t on top. On top of this I also wore the race bib for our team and a baseball cap.

20 minutes in and I thought I was going to melt, but as Carl had said, there wasn’t any time to strip.

Both Carl and Maria drove us hard, and I must admit that Rhona did much better than me.

For the majority of the paddle there was no rain or wind, just heat. But when the rain and wind arrived, wow, that was wonderful!!

I’m really chuffed to say that we came 28th overall, and 2nd in the Dragon fleet of 5, (just 2 minutes behind the Dragon winners – Prawn Stars). 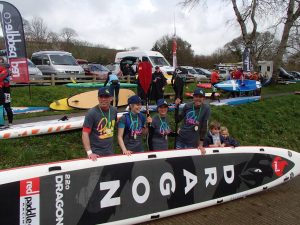 It was a tough paddle, and the next time Carl suggests a “social” paddle, I’ll make sure to wear nothing more than a pair of Speedos.

A huge thanks to Red Paddle Co and Palm Equipment Europe for their support and kit, and to the team at the Head of the Dart SUP Challenge for a great event and use of their photos. 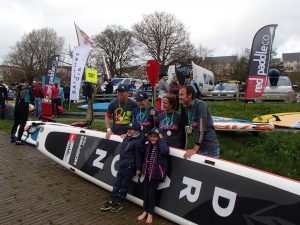