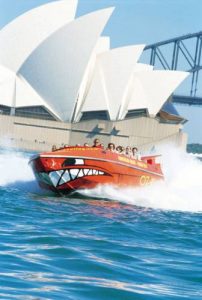 In July of 2001, Rhona and I spent 26 hours in Sydney on a stopover between Thailand and the Mecca of extreme sports, New Zealand. After checking out the Opera House and the Bridge, we decided it was time for a bit of excitement! 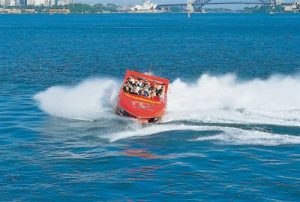 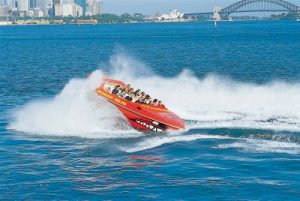 Once they had gathered enough of us to fill the jet boat, we were all issued with waterproof, ankle-length ponchos. It was already raining a little bit in Sydney, (well it was their winter!), but we were obviously going to get a lot wetter!!

We started off by heading out of the harbour, past the Opera House, at a very comfortable speed. Once far enough away from the other boats, they opened up the throttle! Now we discovered why they call these things “Jet Boats”! 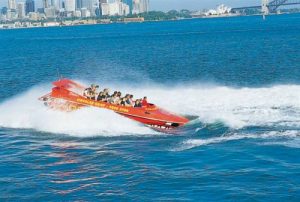 Spray was kicked up behind us and anything within 5 metres from our tail was going to get soaked. After heading down the estuary for a short time, the boat was swung around 180 degrees to face back up towards the bridge. The spray that had been behind us now covered us all as we turned. This was a taste of things to come. All the way back up, we turned left and right, kicking water up everywhere. There was not a dry seat on the boat! It was great fun!! 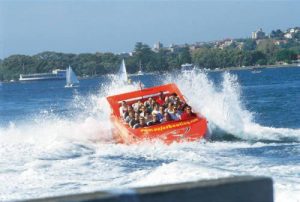 This may not be everyone’s idea of an “extreme sport”, but it definately is a lot of fun. If you get a spare bit of time in Sydney, I would recommend trying this one out. It may not be scary, but it is wet!! 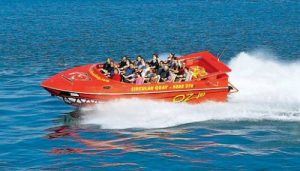 I would like to thank OZ JET BOATING for letting me borrow the photos that have appeared on this page.