This trip had initially been suggested by my very good friend, and SUP mentor, Carl Sawyer last year when we were looking for some SUP challenges, but as it is sea-based, and I had done virtually no sea paddling, we agreed to do the Caledonian Canal trip first.

Once the Cali Canal trip was finished, we started looking at the Scilly trip again.  Carl had first read about the crossing, from the Scilly Isles to Sennen Cove in Cornwall, in a sea kayaking book.  The route started at the last rock on the Scillies and ended at the closest rock on the mainland.  This was a distance of 42km.  However, when we planned our route, we decided we wanted to start from within the Scilly Isles and paddle to Sennen beach, making our route 50km.  This crossing has been done by a handful of highly experienced SUPers, so although this meant that it was not going to be easy, it did prove it was possible. 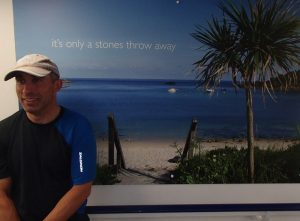 Just a stones throw away 3 hours on a ferry and 8 on a SUP. That is one heck of a throw!!

At the end of 2014, we came across the Celtic Crossing race.  This was an organised event, covering the same 50km course that we were planning to do.  It was advertised as “Europe’s Longest Open Ocean Paddle Race” and “Europe’s only island to island race of this distance”.  However, with a price tag of £650 per person, this was well out of our reach.  Granted you got your own support boat, ferry tickets, etc, but it was still too pricey for us, so we carried on with our own preparations.

Carl and Jason Sawyer are both highly experienced watermen, and with their knowledge of tides, etc, a planned date for the paddle would be between 22nd and 26th of June.  This week was selected as it the air temperature should be warm, but not too hot, and that there was a neap tide due. 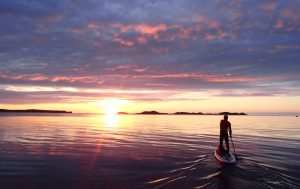 Deano heading towards the sun – photo courtesy of Carl Sawyer

For those of you who don’t know much about the sea, like me, a neap tide is a tide in which the difference between high and low tide is the least. Neap tides occur twice a month when the Sun and Moon are at right angles to the Earth. When this is the case, their total gravitational pull on the Earth’s water is weakened because it comes from two different directions.  Understand?  Me neither!

As this was going to be a big sea crossing, for safety reasons, we would need to have a bigger team.  So, as well as Carl, Jason and myself, (the Cali Canal team), we had Ian Phillips and Mark Richardson join us.  Ian has been SUPing for many years now and is a highly accomplished paddler.  Mark too has been SUPing for years and knows his stuff.  He also works with Jason as aircrew for the Royal Navy Search and Rescue team based at Culdrose.  They fly the route we were about to take once or twice a week, and had immense local knowledge.

As well as the knowledge, experience and skill of the rest of the team, we also carried radios, beacons, etc.  (Ian even splashed out on a 99p compass from China, which he swears was the main reason the trip was successful!)

Along with the water team, we also had Rhona, Stumpy, and another face from the Cali Canal trip, film maker Dave Robson.  Dave was there to make the follow up to “SUP it and See” – “SUP it and See 2: Board Scilly”, as well as giving Rhona a hand with spare kit, etc.

The weather was a major influence on this trip.  The rest of the team mainly SUP on the sea, so they could probably SUP in most conditions.  However, 99.9% of my SUPing has been done on inland waters, so I was the weak link.  Due to not being able to see the waves, I am a much slower paddler.  It’s hard to get a rhythm going, when you don’t know where the water is, or where it is coming from.  (Sighted paddlers can adjust each stroke whether they are riding over a trough or into a wave.  I can’t see this, so sometimes my paddle hits air, over a trough, or goes very deep, into a wave.)

Because of my limited sea skill, we needed the weather to be just right, and over the week before the paddle, the day, time, and even direction of the paddle changed daily.

On Monday the 22nd of June, the plan was set.  We would catch the ferry over to the Scillies on Tuesday 23rd, and paddle back to Sennen first thing on the 24th.

Rhona and Dave joined us on the ferry over, and then carried all of the spare kit, board bags, pump, etc, back to Cornwall.  Ian, Jason and Mark all had hard Jimmy Lewis boards, and Carl and I each had inflatable Red Paddle boards. 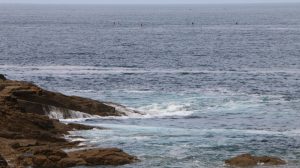 That night, a friend of Jason and Mark called Wayne, very kindly invited us to stay with him and his family.  We were all crashed out by 9pm, as we planned to paddle at first light.  (Well, almost all.  Carl went for a late paddle to watch the sun go down.)

The first few kilometres saw us paddling out through the glassy calm waters between the islands.  As we reached the last wee island, the boys spotted a seal colony, and headed over to investigate.  As I wouldn’t see anything, I decided to keep on paddling.  (The guys would catch me very quickly.)  I was told to aim for the sun, and keep that as my heading. 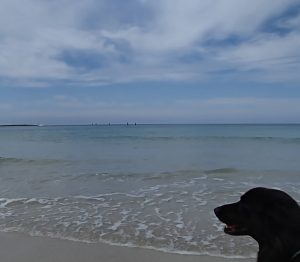 Stumpy watching the team coming in

A few minutes later, I heard a double whistle.  This was a pre-arranged signal Carl and I had agreed on.  A double whistle blast meant “come back to me”, and a single, constant blast meant “stop paddling and wait”.  As I had only just heard the double blast, I wasn’t sure which direction to go to find Carl, so I waited for him to repeat it.  Sure enough, another double blast came through, and then another.  I got a fix on the direction.  Carl was about 20ft above me in the sky!  It was a bloody bird!

As I started paddling again, I heard a long steady whistle blast.  This was definitely Carl this time.  I waited for a few seconds before I heard Carl’s voice.  He had indeed blown the first double whistle, but the birds had confused the issue.  Carl told me that the tide had started to take me north, and that I needed to change my course a little.  From that point on, I had at least one of the guys within 20 metres of me, keeping me on course.

The furthest I had ever been out to sea was about 2km.  Within an hour of starting our paddle, I was well beyond this.  It didn’t worry me at all.  It all just seemed very calm, and I guess, because I had the team nearby, I knew I had nothing to worry about. 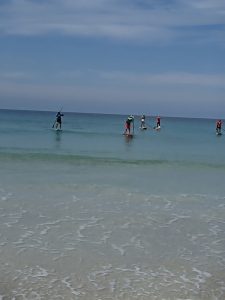 Over the next 6 hours or so, we would take regular fuel breaks and check our directions, etc.  As we came close to the shipping lanes, (described as “dangerous” and “the busiest shipping lane in the UK”), we re-grouped and discussed our plans.  The boys had been watching a couple of large ships, and estimated that on our current course we would probably either collide with the ships, or come very close.  (And you can only imagine the damage we may have caused to those giant ships with our paddle-boards.)  So we chose to take another fuel break and let them go by.

Once “the coast was clear”, (I’m almost an old sea dog!!), we resumed our paddle.

The sea state was fantastic for me.  Very calm, and the swell was almost unnoticeable to me.  Carl told me that the swell was big enough, that when it came between us and the other paddlers, they were hidden behind it.  I guess that means the swell was pretty big, but apart from the odd time I felt my board fall off the back, it was pretty good to me. 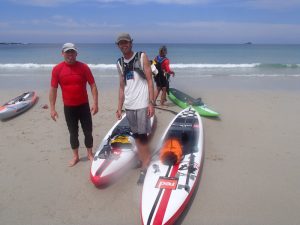 The last hour of the paddle was very hard work, (for me anyway).  We had entered the coastal waters and now had a tide and some backwash to deal with.  This changed the water from a super smooth swell, to a messy, lumpy sea.  I’m sure to the rest of the team this was just another day at the office, but I found it really tough.  Also, as we got closer to the shore, I started to hear the waves crashing on the rocks.  This just heightened my already shaky state.  But with Carl’s usual calm guidance, we managed to make our way through the waves and rocks, and catch a wave to land gracefully at Sennen beach.  (OK, so the “landing gracefully” bit may not be totally accurate.  In fact, up until that point, both Mark and I were the only team members to have stayed dry.  But unfortunately both of us ended the trip with a crash landing on the sandy beach.)

The 50km trip had taken us 8 hours and 11 minutes to complete, and the guys had seen seals, puffins and dolphins along the way.

I know that the guys could have done this paddle much quicker without me, but they all very generously said that they were just there for the jolly and not a race.  The goal had been to get the blind man from the Scillies to Cornwall on his SUP, whether by standing, kneeling or even prone, but that was what they were there for.  I’m very glad to say they were successful in their mission, and we did it all standing! 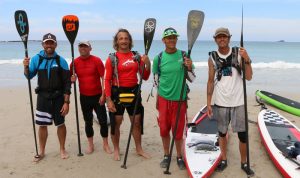 Not only am I the first registered blind person to do this crossing on a SUP, (or possibly on/in any solo craft), but Carl and I are also the first people to do it on inflatable SUPs.

This trip would not have been possible without this team, so a huge thank you goes out to them.  THANKS guys!

I would also like to thank Red Paddle, Jimmy Lewis, and Palm for their continued support on this and future adventures.  Thank you.