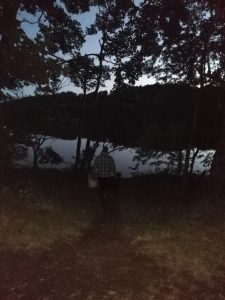 Last year, as part of my training for the Big 2019 Challenge, (which was blown out due to some big storms), I had been doing some open water swim training. On a couple of occasions, I managed to knock out 5km. Although this was quite tough, it got me thinking about my plans for my #2020visionofablindadventurer project, in which I hoped to take on several challenges throughout 2020. Maybe I could do a swimming challenge.

The original goal had been to swim 20km in 20 hours. The idea would be to find 4 or 5 smallish lochs, within an hours’ drive of each other. The clock would start as I stepped into the first loch, and would stop after I stepped out of the last one. The time would include the swims, the travel between the lochs, the feeds and rest periods. 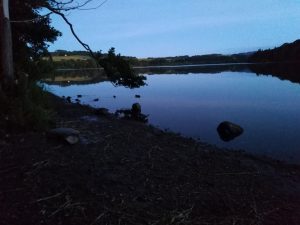 I had planned to do the challenge around the longest day, knowing that if we headed north, we could get 20 hours of daylight. I started my training in January, and by the end of February I was doing 3k twice a week in the pool. By April I hoped to be swimming around 4-5k in the open water, and also planned to recce some locations over April and May. Then, in March, COVID, and the restrictions arrived, and like everyone else, my plans were put on hold. 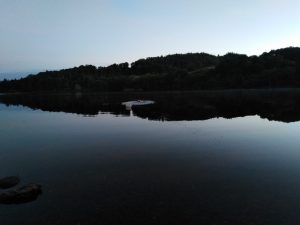 My next swim wasn’t until June 9th, and that was only a couple of k. I knew there was no way of training up to do 20k in a couple of weeks. However, by swimming twice a week, I was soon starting to get close to 5k each swim. By early July, I realised there could be a challenge.

The original 20k in 20 hours, at 4 or 5 different lochs was no longer an option. But maybe I could give myself 20 hours at my local loch, (Clunie), and see what I could do . If I could hit double figures, I’d be very happy. 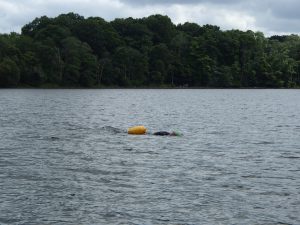 By the day of the challenge, I had done just 12 training swims. At 4am Rhona and I arrived at Clunie to find that it was still too dark for me to see where I was going. 35 minutes later I entered the water.

Sure enough, within 20 minutes I had gone off course and was lost. After 130 breaths I should have arrived at some reeds, but instead, at 150 breaths I found myself tangled in some lilies. Not knowing where I was, I kept swimming, keeping the darkness of the shore to my right side. After hitting more lilies, I was very confused, until I hit a very soft raised section. Through the feel of the soil, under the water, I realised that I was at “Goose Poo Island”, (aka S**t Island). I now had a bearing on where I was. 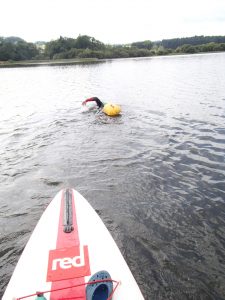 For the next couple of hours I got my head down and plodded away. The original plan had been to do the 20k over 4 or 5 swims in a day. But I had spoken to a friend about endurance stuff, and he suggested that I do this swim in no more than 3 sections. Each time I stopped swimming, I would need to change out of my wet kit, eat, rest, and stretch before starting the next one. He recommended that this should take around 2 hours each time.

At around 2 hours in my left shoulder, (old injury), started to play up. At 3 hours, my right elbow, (new injury), joined in. They both felt like they were beginning to swell up, and I knew that this could be a problem when I tried to get my wetsuit back on after the first break. With this in mind, I decided to push my first swim as long as I could, as that may be all I would get. 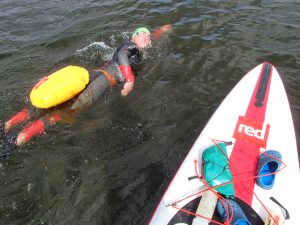 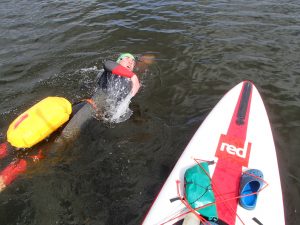 I know that to some of you hardcore swimmers, 20k in 20 hours isn’t that big a deal, but for me only having had 12 training swims, I can live with that.

As always, my love and my thanks go to the wonderful woman who supported me all the way through this challenge, the gorgeous Rhona. 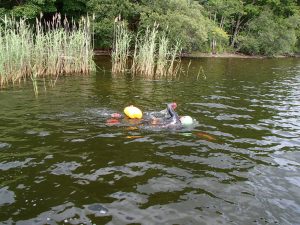 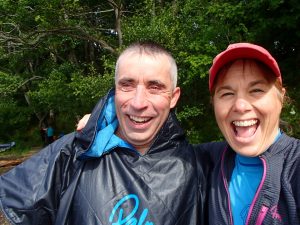