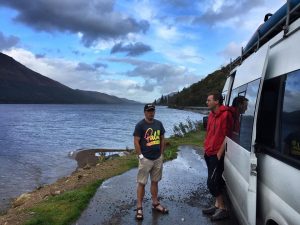 The forecast for the 2017 UK SUP Great Glen Paddle, (92km non-stop paddle from Fort William to Inverness), was looking good.  With predicted tailwinds of 17kmph from Fort William to Fort Augustus, and a slight increase to 25kmph up Loch Ness.  These winds would be much more favourable than the 30-40kmph winds of the previous year, and a new race record could be on the cards.  However, the forecasters do sometimes get it wrong.

In 2016, there were 7 SUPers and 1 kayaker, and we started in Inverness due to the wind direction.  This year the field had grown to 25 SUPers and 4 kayakers, and most of these paddlers were about to have their skills put to the test! 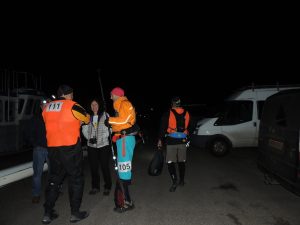 We had our same team as last year; Allistair was my sighted guide, and Alison and Rhona were the land/support crew.  Allistair has guided me on several of my bigger challenges, and was once described in a newspaper article as being my “long term partner”.  Although we are great mates, that description may be pushing it a bit too far.

Starting at 2.30 a.m. we paddled the first 10km section along the canal to the first portage at Loch Lochy.  As we had done the 2016 GGP, we had an idea of what was ahead of us.

Last year Allistair had put a red light on the back of his board for me to follow, but due to the rolling waves on Loch Ness, I had lost him several times.  This year Allistair had put a much bigger, brighter, white light on his board to follow.  This worked much better, although I did occasionally lose sight of it in my eye’s many blind spots, whenever I turned to either talk to other paddlers, or to look for them. 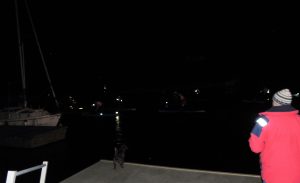 After a short portage, we were on to Loch Lochy.  I remembered that last year this was really rough.  However, after 10 minutes of paddling out on to the loch, it was still feeling pretty calm.  It looked like Lochy was going to be a breeze.

20 minutes later, I was on my knees, and the wind and waves were pummelling us!

In the darkness we couldn’t see the waves until they hit us, sometimes from behind, and other times from our 8 o’clock direction.  It was the latter that caused the most problems, grabbing the board and spinning it off course.  On top of the waves and the darkness, we had 30+kmph winds with gusts closer to 50.  The adrenaline was definitely pumping. 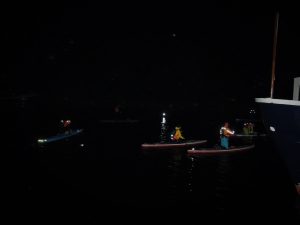 Two and a half hours in Allistair got a text from Alison telling us we needed to pull in to the car park.  We didn’t know which car park she meant, so guessed it was the one at the end of the loch, a good 7km in front of us.

2 minutes later we got a text from Pete, the race director, telling us to get off the loch at the next lay-by, where the support vehicles would be waiting with their headlights shining on to the loch.  This was another 2km away, so took us another 15 minutes to reach it.

As we approached, people were trying to guide me in by shouting at me to “go towards the light”.  I shouted back that I was too young and didn’t want to go towards the light just yet, but I think this was either lost in the drama of the situation, or just a terrible joke. 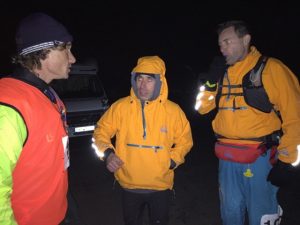 Over the next few minutes we started to hear about people being blown off their boards, paddles being blown out of hands, and kayakers being capsized.

By 3am, everybody was accounted for.  3 paddlers had self-rescued and were camped along the shore in their bivvy bags, waiting for daylight, 1 paddler had lost his paddle and had had to paddle to shore using his hands, and another paddler had left her board and paddle on a wee island, and waded on to the shore, with plans to rescue her kit once dawn broke.

Several of the faster paddlers had passed the lay-by when the race was halted, so they continued on to the end of Lochy, and some of them paddled on to Fort Augustus.

Pete spoke to the RNLI and Coastguard to say that the race had been stopped, and they agreed with him, telling him that the wind was expected to increase to gusts of over 80kmph later that day.

This was passed on to everyone, but 4 of the stronger paddlers decided to carry on to Inverness, outside of the UK SUP cover, and said later that Loch Ness had been a real challenge, with waist high waves, and the end of the loch taking forever to come into sight.

Although the race didn’t go quite to plan, it was still an awesome experience. 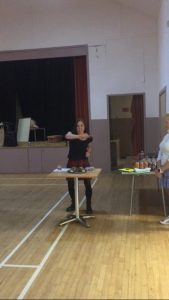 Later that evening we all met up in the Fort Augustus village hall for dinner, prize giving and a ceilidh.  With 90% of the paddlers being non-Scots, haggis, Robert Burns, and a wee “nippy sweetie” made an appearance, with Rhona scaring some and confusing all with her wonderful address to the haggis. 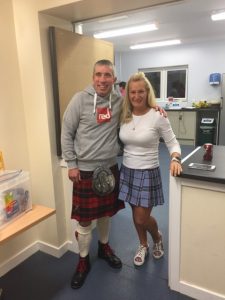 This was also a chance for us to say farewell to Joanne and Pete of UK SUP, as they are now moving out to Australia.  I first met Jo last year at a SUP weekend, where we instantly hit it off.  It was thanks to Jo that I got my place on the SUP 11-City, where she was also my sighted guide for the race.

As well as saying goodbye to Jo and Pete, we also got to say hello to some new paddlers, who I hope to bump into on the water in the not too distant future. 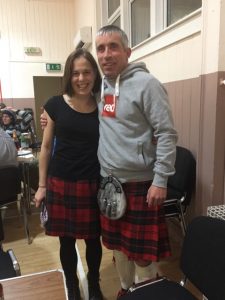