had a go at scuba diving a few years ago whilst holidaying in Crete. I was given about an hour of instruction and then went out into the sea with a group of about 5 other people. We were out there for around an hour. This was just a taster to see whether we wanted to take the sport up. 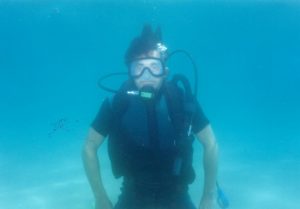 Having the ability to swim around at 6 metres below the surface, without having to resurface every 2 minutes for air, was really cool. We also got to see some underwater treats that we would probably never have seen from the surface.

I won’t be making scuba my main sport, but I certainly understand it’s appeal. If you have never tried scuba diving, it is definately worth having a go. There are many places around the world that teach scuba, ranging from the sun kissed beaches of Thailand and Australia to the not so often sun kissed beaches of Devon and Cornwall. If the thought of going into the cold waters off the British coast is not your thing, check out your local swimming pool. A lot of pools offer taster sessions, and it would be a shame no to try it!