The nice folk at Experience Days arranged for Rhona and me to do some indoor ice climbing.  The location for this was to be at the Ice Factor, in Kinlochleven, just a few miles south of Fort William on the west coast of Scotland.

We had both done a bit of rock climbing, but ice climbing was something new for us both.  And with the Ice Factor describing itself on it’s website as follows, we knew we were in for a fun time! 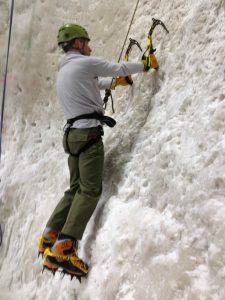 When we arrived at the Ice Factor, we were very impressed by the size of the building.  I guess it had to be pretty big, as it contained several dry climbing walls, as well as a shop, café, and of course the ice climbing section.

The main climbing areas were open planned, so visitors could walk through the building and watch climbers on different walls, taking on different climbs.  But the ice climbing room was quite different.

When we arrived, we were told that Jamie was going to be our instructor for our session.  It turned out that Jamie was Mr Ice Factor, and as well as teaching climbing, (both rock and ice), he was also a member of the local mountain rescue team.  We knew we were going to be in safe hands. 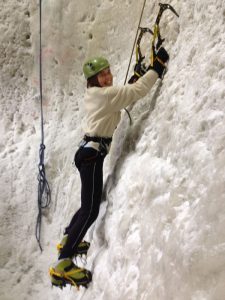 Jamie gave us our ice climbing kit, which comprised of crampons, helmet, and harness.  After putting these on, we slowly tottered into the ice climbing chamber.  (I say tottered, as the crampons made me feel like I was wearing a pair of women’s high heels.  This is how they felt when you walked in them, so I am told!)

Jamie opened the big freezer door to the ice room and we entered.  In front of us were several walls of thick freezing ice.  All “500 tonnes” of it, and not a smooth bit to be found.  Jamie explained that the reason for the different textures and angles was to represent what you would find if doing outdoor ice climbing.  Jack Frost doesn’t go around smoothing everything off out there.

Our instruction started with learning how to kick our crampons into the wall in front of us, and then standing up on them.  This sounds very straight forward, but I had great difficulty in trusting my weight to a couple of 2 inch metal spikes sticking into a wall of ice.  Rhona was much quicker than me with this part.  Within a couple of goes, she was doing it. 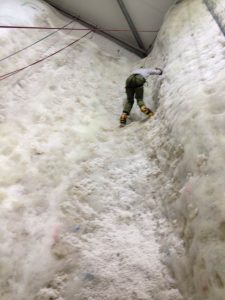 Soon we were traversing our way along the wall from left to right.  Although we were only a few inches above the ground, (and harnessed up to a line that Jamie was controlling), I still felt pretty uneasy.

Once Jamie was happy with this, we were given the mighty “ice axes”.  Great now I could do some real “manly” stuff.  But Jamie said no.  The idea with the ice axes, as with ice climbing overall, is not to be heavy handed, but to be almost balletic.  The harder you kicked or threw the axes, the more chance of breaking the ice away and you falling.  It was all about technique.

The idea was not just to swing the axe at the wall as if hammering a nail in, but to reach up and over, so that the axe tip came down into the wall.  (A lot easier said than done.) 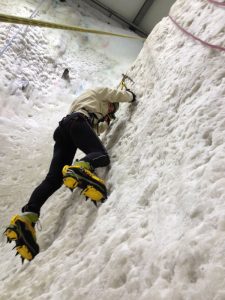 After a few minutes of practising this, Jamie told me to start climbing upwards, using the ice axe and crampon technique he had taught me.  As I started making my way up the wall, he watched an advised me on my technique, (or maybe that should be “lack of” technique.)  I was listening to what he said and taking it all in, but he was getting harder to hear.  I hadn’t realised how quick I was going up, and before I knew it I had reached the top of this wall.  This was the smaller wall, around 30ft tall, but it felt great to get to the top.

Once Jamie lowered me back down, it was Rhona’s turn.  It didn’t take her long to get to grips with the axes, and she too headed up.  She found it a little bit harder than me, but I think this may have been partly down to her eye sight.  She was using hers!  This meant that she would stop, and take a look around to see where to put the axe.  When I had gone up, I never bothered looking up, as there was no point.  I wasn’t going to see anything.  So I just plodded away, swinging the axe.  If it stuck, great, if not, I swung again.  Rhona was looking for places to put her axe, so therefore was spending more time in one place and slowly getting tired.

About 15 minutes after she started, she made it to the top of the wall, and Jamie lowered her down.  I thought that this was the end of our session, when Jamie asked if I fancied a climb on a different, tougher wall.  Come on readers, you know me, so you know what I said.  All together now – “yes please!” 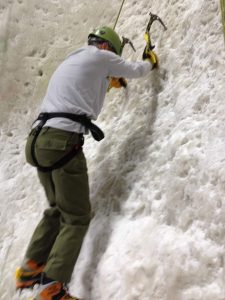 Deano half way up – photo courtesy of Jamie, Ice Factor

Jamie led me over to the corner of the room, and gave me a brief description of what was ahead of me.  This was the big 50ft wall, and I would be climbing in the corner.  This meant that at some points I would need to spread my legs and straddle the gap.  He also pointed out that there were some overhanging bits.  This was certainly going to be a challenge.

Over the next 20 minutes or so, I slowly made my way up the wall, with Jamie giving me advice on where to put my feet, etc.  This was certainly much tougher.  Towards the top I could feel myself running out of energy.  My arms were aching from the swinging of the axes and legs were getting very tired.  At one point I had to stop for a breather.  It wasn’t the most relaxing break I’ve ever had, but it was a sort of rest.  My left arm was totally worn out and I felt that I had come to the end of my climb.  But Jamie kept the encouragement going.

“How tall are you”, he shouted.

5 foot or 50 foot, it still seemed a heck of a long way to go.  But with Jamie and Rhona both urging me on, I eventually made it to the top of the 50ft wall. 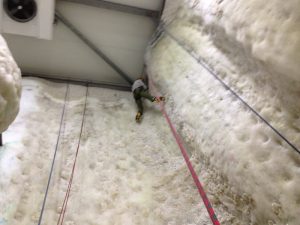 Deano at the top – photo courtesy of Jamie, Ice Factor

When I got down, Jamie told me that not many people had gone to the very top of that corner, so I had done well.  Would it be corny to say that was the icing on the top of my cake!?!

Rhona and I had a fab time, and would highly recommend this as a great activity to try out, and to definitely do it at the Ice Factor!