In November 2010, I was invited to throw myself off a very high bridge.  The invitation was made by my very good friend John Mason-Strang, of Nae Limits.  I’m sure if it had been anyone else, I would have taken offence.  However, I knew that John, and another friend, Muzza, had been trying to set up a bungee site for several years.  They had joined forces and created the company “Highland Fling Bungee”.  Their aim was to create the first static bridge bungee site in the UK, and in November 2010 they were almost there.

It had taken four long years to get everything agreed with the appropriate authorities, etc, and things were just about ready to rock and roll.  An advertising company had contacted Highland Fling Bungee requesting their help with an advert for the HSBC bank.  They wanted footage of their character doing a bungee jump, and were would look better than the River Garry Bridge, in the Pass of Killiecrankie, with the Scottish highlands as a spectacular backdrop.

The bungee site was rigged up for 2 days, and fortunately for me, and a few other friends of John and Muzza, the filming only took 1 day.  This meant that we would have a day to come along and play. 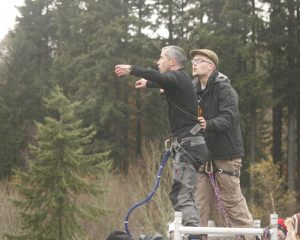 The day of the filming for the advert had been beautiful.  Blue skies, sun shining, birds singing, angels smiling, etc, etc.  Unfortunately on the day we all came along, the blue sky, sunshine, singing birds, and the angels had all left with the catering truck after the filming, and we were left with rain, wind, hail, rain, and more rain!  There was snow on the hills just a few miles from where we were standing.  All in all, it wasn’t the best day to be standing around on an exposed bridge, waiting to throw yourself off it.  But then it was November in Scotland!!

Whilst everything was being set up, John told us how the plans for the Highland Fling Bungee were coming along.  The plan was to launch in the Spring of 2011.  They were going to build a platform, which would be 40 metres above the river, and just a few metres below the bridge, and when the jumpers had finished bouncing, they would be brought back up to the platform to be disconnected, etc. 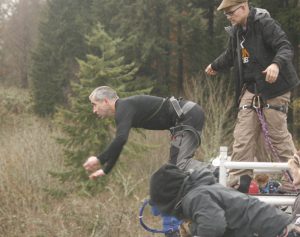 However, today was more of a stunt, and for our jump we would be leaping off the top of the bridge.  This was only a few extra metres, (maybe 5 or so), and we would then be lowered into a waiting boat below us, to be disconnected, etc.  This made it all very exciting for us!

As usual with bungee jumping, certain ropes go with certain weights of people.  Me being a lightweight, in so many ways, my bungee rope would be towards the end of the session.  This meant I would have plenty of time to watch and listen to everyone else, before I went over.  This also gave me plenty of time to remember my 5 previous bungee jumps, and remember how nervous I was back then. 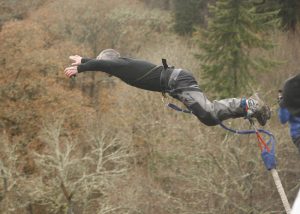 Muzza was the first one over.  He had done over 200 bungee jumps in the past, so it was just another day at the office.  Next was John.  Although John and Muzza had come up with the whole Scottish bridge bungee site, John had never actually bungee jumped before.  With all of his mates, and his son, Dale, watching him, the pressure was on and he couldn’t let the side down.  I spoke to him briefly before he jumped, and he was certainly a tad nervous.  But when it came to the time to jump, he didn’t hesitate.  Afterwards it is fair to say that John was high as a kite for quite some time.  He had got the “Bungee Buzz”.

An hour or two, and several very cold rain and hail showers later, it was my turn to jump.  Sure enough, as the straps were getting attached, my heart started to pound, my stomach started to turn, and I didn’t feel great.  I was lead up on to the railings of the bridge, and the instructor talked me through the usual.  “Stand up straight.”  “Arms out to the side.”  “Focus on the horizon.”  It all started to get very scary.  I started to think I may bottle this.  I didn’t feel great, and I worried that I may not jump.  My instructor was going to count me down from 5, 4, 3, 2, 1, go.  Would I jump at “go”.  I don’t think I will.  I’m going to look a total dick here.  All of this was running through my head. 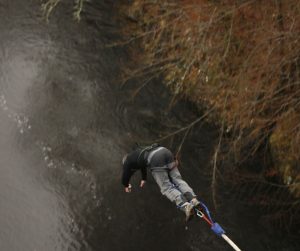 I was airborne!  I had jumped, I was now falling through the air!  Yeeha, I done it!!

In May 2011, the Highland Fling Bungee jump site at the River Garry Bridge, in the Pass of Killiecrankie, near Pitlochry was opened to the public.  So get yourself along and be flung by the Highland flingers!! 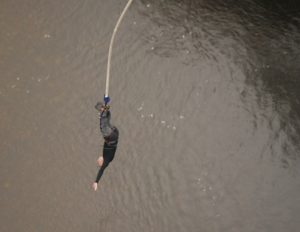