The video clip is a 360° view from just above Namche, in Nepal

The original plan had been to fly from Kathmandu to Lukla airport, and join the well trodden trek from Lukla to Everest Base Camp and back again.  We would have 16 days in which to trek the 111km.

However, due to bad weather, our plans were to change, and we would now have to trek an additional 50km, in a reduced time of 12 days, and the first 3 – 4 days would be on a much less used, and much more arduous route.

The gauntlet was thrown down.  Would our band of VIPs (Visually Impaired People) be up to the challenge.  Of course we would!! 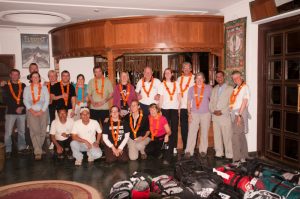 Our group was made up of 7 VIPs (Drew, Eddie, Fiona, Jacky, Jen, Natalie, and myself), 7 UK guides (Amanda, Bob, Derek, Diana, June, Linda, and Rhona), 3 Nepal guides (Darma, Pemba, and Puna), and our expedition leaders and organisers Fraser and Sue Williams.

It was Fraser and Sue who had come up with the initial idea.  They had been running a trekking company in Nepal for several years, and had been working with different charities out there.  They had come up with a plan to set up a charity in Scotland, to help disabled people get out to Nepal and do some trekking.  The charity was called S-Team Challenge.

We were to be their first disabled group, and I’m sure, (no matter how hard they may try), they will never forget us!! 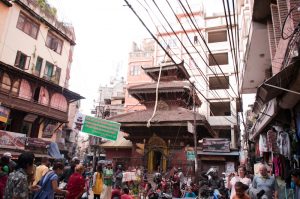 They had got in touch with us through the Perth & Kinross Society for the Blind, and after a few meetings in March, we were all set to start our training.  Living in Perthshire meant it was not going to be difficult to find hills to train on.  We started off meeting up once every couple of weeks to walk together.  The group was a mixture of people and abilities.  Some of the group were relatively fit, and others were not so.

Not only were we to try to get fit for this trip, but for most of the group, they would be walking with somebody they had never met before.  Apart from Rhona and I, none of the VIPs had ever walked with their new guides.  In fact, in most cases, the VIPs and guides had never even met before.  Not only that, most of the guides had no experience of walking with a VIP, let alone guiding one.

Learning to guide a visually impaired person is not easy, so Rhona tells me.  There is a lot for the guide to learn.  Does the VIP prefer their guide to be on one side or the other when walking together, does the VIP need to be told about every obstacle coming, do they prefer to be told by speech, or just having the obstacle tapped, etc.

Not only does the guide need to know this, but the VIP has to put total trust in their guide.  In Nepal, and occasionally in Scotland, we would be walking along very narrow paths, with an exposed side.  That exposed side could have a drop of several hundred metres.  When the guide tells you to keep left, you must do this, trusting that your guide knows their left from their right.  Or when crossing a stream, the guide has judged that you should be able to jump across without getting your feet wet.  You need to trust that your guide knows your abilities well enough that you will jump.

We were due to be in Nepal in October, and had six months to get fit, and build a strong bond with our guides. 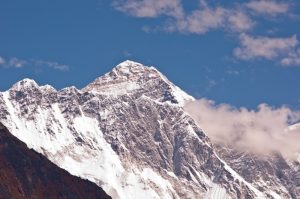 By the time we arrived in Kathmandu, we were a fit and strong team.  The VIPs and guides had bonded well, and a strong level of trust had been formed.  This was just as well, as Kathmandu does not have any pavements, so when walking through the town, you are sharing the road with other pedestrians, cars, bicycles, and mad motorbikes.  This was to prove the first “hardcore” guiding to be done in-country.

Our plan had been to fly out of Kathmandu, to Lukla airport, on the Friday morning.  However, due to heavy fog, Lukla airport was now closed, and all flights for that day were cancelled.  We’d just have to come back tomorrow.

(Lukla airport is an amazing airport, hanging off the edge of a mountain.  In fact whilst we were over there, Channel 5 had run a show called “The World’s Most Dangerous Airports”.  Lukla airport was number 1!  In the past they used to have around 6 crashes a year, but now things were much better.  They averaged only 1 crash a year, and that had happened just a few weeks before we flew out there.  They had had their annual quota, so everything was OK, or at least that is what we thought.)

We returned to Kathmandu airport on the Saturday, only to find out that the fog had not lifted, and Lukla was closed again. 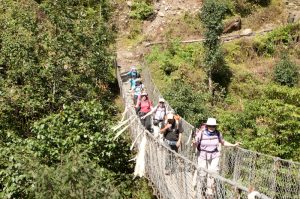 One of many bridge crossings – courtesy of Eddie Adams

They came back with 2 possible plans.  There was another “Base Camp” available to us.  This was Annapurna Base Camp, which was located near Pokhra.  The second option was to fly to a small airfield, over 50km south of Lukla, called Paphlu, and trek up to Lukla, to join the Everest Base Camp trail. 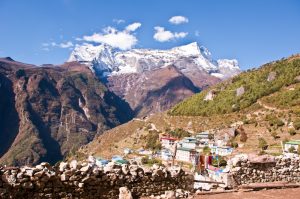 Not much was known about Paphlu.  Neither the expedition leaders nor our guides had ever been there.  All that was clear was that it was not far from a recognised route, (about half a day’s walk), and that it was highly unlikely that a VIP group had ever walked it before.  We would join the original “Jiri” trail at Ringmo, and from here on in, the route had been trekked by both our leaders and Nepali guides.  (The Jiri trail was the route taken by the 1953 first successful Everest ascent team.)

What was also known was that this route was going to be extremely tough, and would test the team much more than the main Everest Base Camp route would.  We would only be achieving a few hundred metres height each day, but to do this, would mean that we would need to drop several hundred metres to cross a river, before climbing back up to the same height as we started from, and then climb a few hundred more.  If we took this route, it was likely that we may not get to Everest Base Camp, but would get close enough to see Everest.

The team were given the choices and discussed them whilst waiting outside Kathmandu airport.  We agreed that we would give ourselves a deadline of Monday morning.  If the fog was to lift by then, we would still be able to get to Everest Base Camp and back again.  However, if the fog still had not cleared, then Paphlu was the one we wanted to do. 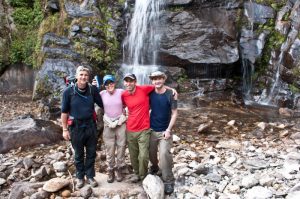 Unfortunately the fog did not clear, so on the Monday morning, we set off to try the Paphlu option.

The flight was in a tiny 17 seater plane, which caught a bit of turbulence just before landing.  We had been flying over some tree covered hills, when all of a sudden we seemed to drop out of the sky.  A couple of seconds later we were landing on a grass and gravel runway, in a clearing.  Just above us were the few houses that made up Paphlu.

We spent a night in a very nice tea house in Paphlu, and early the next morning we were off.  We had picked up 7 local porters, and throughout the day we’d play leap frog with them.  They’d set off in front of us, carrying 2 backpacks each, and we’d pass them when they’d stop for a break.  Then when we stopped for a break, they’d pass us.  This went on for the rest of the trip, only ever spending any time with them either at night time or in the morning at our accommodation. 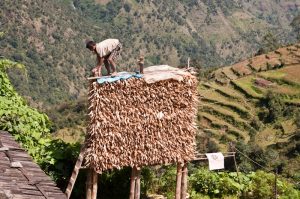 Our trek started on the Tuesday morning, which happened to be the first day they allowed flights into Lukla.  That was a bit galling, until we heard that one of the first flights in crashed.  Fortunately this was not a fatal crash, but I’m sure it gave the passengers a bit of a scare.

I could now go on and give you a daily diary, but to be honest I was too busy trekking to keep a diary.  (A full breakdown of our route can be found further down the page.)  What I will say is that the first 3 or 4 days before we got to Lukla were the hardest and the best.

The path was extremely tough.  Lots of boulders, ruts, and hills.  Boulders and ruts aren’t too bad for most people, but when you can’t see where you are going, they do tend to get in the way a bit.  Obviously the guides could not tell us about every rock or stone, so it was very hard on them trying to judge what information to give us, whilst trying to pick their own route.

However, at the same time as being pushed physically, the first few days were the closest we got, as tourists, to see the real Nepal.  Not many trekkers came this way, so the local Nepalese people were not jaded by the flash, loud tourists.  They were extremely friendly and generous.  Whenever we passed anyone on the route, they would always greet us with a “namaste” (hello), and a smile, and on some occasions coming over to speak to us. 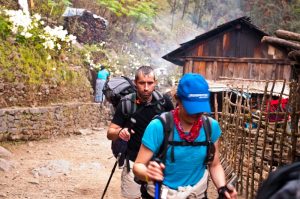 At some point on the trip, every member of the team had been ill.  A cold / flu type thing did the rounds, 2 or 3 of us got stomach upsets.  (I had the runs for 6 days, forcing me to stay in bed for a whole day, and then catch the group up over the next 2 days.)  Also, with a group of that size, emotions occasionally ran high.  However, after all of the ups and downs (both emotionally and geographically), the team did a fantastic job.

I think that with the amount of training we had done over the previous months, the original trek would have been completed easily.  However, with this new route, extra distance, and less time to do it, the team were challenged.  But that is what we were there for.  The team took up the challenge, and won! 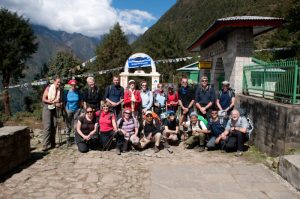 End of the trek at Lukla – courtesy of Eddie Adams