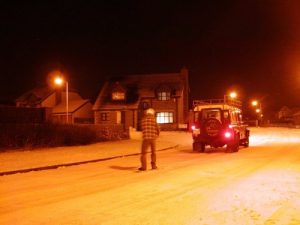 No, it is not a misspelling of “riverboarding”. Rover-boarding is just like water-skiing, but without the skis and a boat, oh yes, and without the water. Our skis are an old sandboard, our water is snow and our boat is a Land Rover. Hence the “Rover”-board! 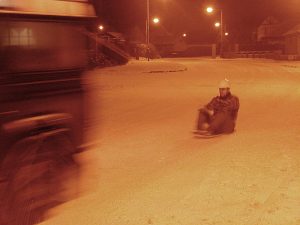 Our friends from Surf Wax, Jo and Nick, recently came up to Scotland to see us. It was the end of January, so there was plenty of snow around. They had brought a couple of power kites with them, as well as an old sandboard. The plan was to find a flat, snow-covered field and play with the toys. Hopefully the wind would be strong enough to pull the boarder across the snow. A bit like ATB kiting. Unfortunately, the wind was not really there. We had a little bit, but not enough to get some speed up. (Typical! There had been a really good 30 kph wind, the previous day.) So we needed to find something else to do. 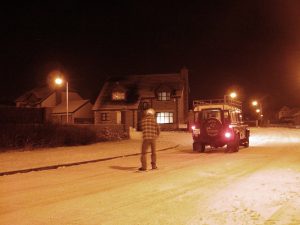 At the moment, the area where we live is a building site. Very few of the houses are occupied, so there is not much traffic on the roads. (Almost none at all.) We decided that most people would be in their houses by 8pm, so this would be the time to go Rover-boarding! 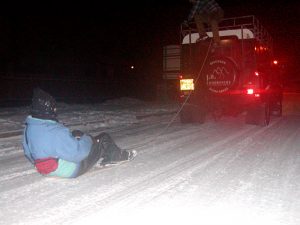 With a rope tied to the roof-rack of our Land Rover, we went out to play. The snow was deep enough to slide on and there was hardly any cars around.

The rope we were using stretched slightly, so we soon became aware of a useful technique. You let the rope go taut and then pulled it into your body. From that extra stretch, you could increase the speed you were travelling at! That was great! If you timed it right, you could get alongside the Land Rover and wave to the driver. If you didn’t time it right, you ended up in the back of it!! 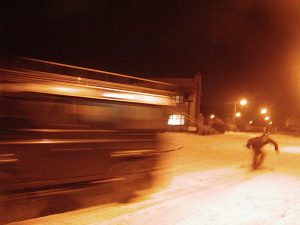 We had a fantastic time! Sometimes standing and other times sitting down. But always getting the buzz!!!

The photos above show you waht we were doing. They were taken by Jo and Nick of Surf Wax, and my lovely wife, Rhona. 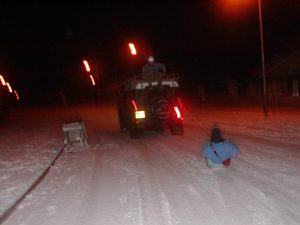 Rhona and Nick took turns at the driving so we all got a chance to Rover-board!

As with most of the activities featured on Extreme Dreams, Rover-boarding is a dangerous sport.