In November 2004, I was invited, by Barcroft Media, to try my hand at tandem hang gliding. Obviously I was not going to turn this down, especially when I heard it was with Airways Airsports and their star instructor Judith Leden. I had read about Judith?s various world records, so was very keen to meet her and fly with one of the best!

We arrived just after lunch, on a lovely autumnal day. The sun was shining, but there were a few clouds. On the ground it was fairly warm, but I was told it was going to get colder as we got higher. I was given my helmet and taken out to see the glider. I would be flying with Judith, so I was introduced to her and our glider. Judith started off looking quite normal, but by the time she had put on all of her extra layers, big gloves, etc, she looked like a Michelin Woman. I started to wonder if my T-shirt, thin fleece and waterproof jacket would be enough protection for the expected temperature, but being a tough Scotsman (and too vain), I decided to say nothing. 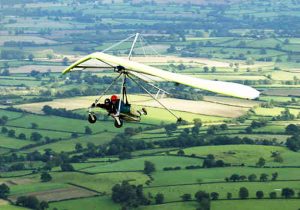 We took the glider from the hanger and pushed around the airfield to our starting point. We were to be towed behind a microlight, so in the distance I could hear the buzzing as the engine was started and the prop spun into action. ?Prop? ? as you can see I am a total expert!! 🙂

Judith introduced me to the different parts of the glider and explained how things were going to work. We were both going to be strapped into a sling below the wing, and would both be holding onto the main power bar. This bar was to be pulled and pushed, depending on what manoeuvre was required. I would also be given some control once we had reached our desired height, but of course, Judith?s hands would never be far from this bar

After being strapped in and attached to the tow line, the microlight revved it?s engine and we were off. Our plan was to climb to just below 4,000 ft and then release the towline. Surprisingly, it only took a few minutes to achieve our maximum height, and I could now feel the wind blowing into us and the temperature had definitely dropped. A pair of gloves would have been handy, but it was a bit late now. I would just have to wing it!!

When the towline was dropped, we experienced a sudden stalling feeling. As I had not seen the line detach I hadn?t realised what had happened, and the adrenal gland started working, as well as my grip tightening. I looked to Judith and she told me what had happened and that everything was fine. We had been going at the same speed as the microlight, but on disconnecting our speed had decreased. Quite obvious really, but not seeing the line drop, I was unaware of this. 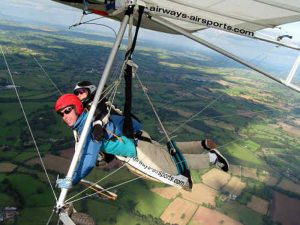 As we settled in for our flight I started to relax and enjoy myself. It was amazing to be so high in the air, and suspended under the wing. We all get used to sitting in a plane or on a fairground ride whilst high up, but there was no sitting, just hanging, with the find in your face. Unusual, but exciting!

We were in the air for around 15 minutes and spent the time gliding flat, then dropping, then climbing. Basically playing with the thermals and having a great time! I was unaware of the speed we were flying at until we came in to land. As we approached the landing strip, I could see the ground flying past, underneath us. Our touchdown was extremely smooth and we soon came to a halt.

It is quite hard to put the feeling of hang gliding into words. I have paraglided and skydived in the past and expected it to be similar, but it wasn?t. It was a very new and exciting feeling. Hang gliding is definitely another one of those sports that I hope to do again!