As I have been doing a lot of swimming over the last couple of years, I really fancied having a go at the Monster Swim, and managed to persuade my wife, Rhona, and our very good friend Julie Beech to come along for a wee swim too.  The 2 girls had only just started to learn to swim properly the previous summer, and had only been doing open water swimming for a couple of months, so, they decided to do the “Wee Nessie”.  I entered myself in for the “Big Yin”. 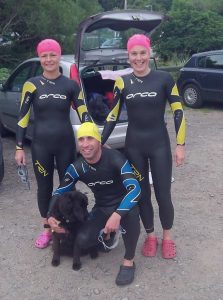 Due to my sight restrictions, I would need a guide, and a very kind friend of a friend volunteered for the job.  His name is Eddie Riach, but as we already have another friend called Eddie, we re-christened him “Eddie the fish”.  Eddie has been swimming competitively for many years, and had recently celebrated his 60th birthday by swimming 60km over a 2½  day weekend, (in 3 lochs, including Loch Ness), along with his daughter Jenni.

We met up in July for several training sessions, and decided that the best way for Eddie to guide me would be by him wearing luminous yellow socks, and for me to follow them.  So long as he was not too far in front of me, (2 metres in calm water, and 1 metre in rough), I should be able to see the socks.

The master plan for the event was for us all to meet up in Dores, (the location of the swim), on the Friday night and set up our tents, hoping to camp on both the Friday and Saturday night.  However, the forecast was not looking good for the Saturday, so we decided that we’d only camp on the Friday and get back up the road straight after the swim.

As we approached Loch Ness from the Slochd Pass, Rhona was able to see the loch about a mile away.  From here, she could make out big waves.  “Oh heck” I thought, (or words to that affect).

Throughout the night, as we tried to sleep, we could hear the waves crashing on the shore.  But, when we got up at 6 on the Saturday morning the loch was as flat as a pancake.  Hmmm, pancakes.  If the conditions were going to be like that for the swim, we’d have a great time.  However, by 7.30 the wind was back and the waves had come with it. 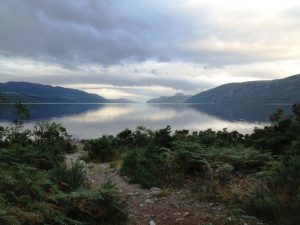 Loch Ness at 7am, before the wind arrived. – Photo courtesy of Eddie Riach

As the wind increased and the waves got bigger, we were told that instead of the “Big Yin” swim being at 9.30 and the “Wee Nessie” being at 10.30, both swims would start at the same time, around 9.00.

The course was marked out by several large triangular buoys.  The course was ½ a mile long, so the “Big Yin” swimmers would have to swim 2 laps.  Eddie gave me a mental map of the course, and we worked out that we would be doing 5 left hand turns, with a gap of around 300 metres between each turn, before heading home on the final sprint finish.

One of the concerns we’d had during our training sessions, was that it would be almost impossible for me to see Eddie’s socks, if we were to try and enter the water at the same time as everyone else.  So the organisers had very kindly allowed us to start about 5 metres ahead of everyone else.  We’d be in the water for our start, whilst everyone else would start with a 2 or 3 metre run in.  This would give us just enough time for Eddie to take off, and me catch sight of his socks, before the water became a heaving, bubbling mass.

As the foghorn blew, we took off.  Within a couple of seconds we realised a slight error in our calculations.  Everyone swimming the mile, (all 363 of them), had been issued with yellow caps, (the ½ milers had pink hats).  This meant that as soon as other swimmers caught up with us, the water was a mass of yellow.  Every now and then I would catch a glimpse of yellow either to my right or left, and head off towards it.  Only for the yellow to disappear as the swimmer lifted their head out of the water!  This made for a very interesting swim.

As the weather got worse, the waves got bigger, and there was many a time that I found myself swimming in mid-air.  I would bring my arm around to catch the water, but would just get a handful of air, as I topped the crest of a wave.  Awesome!!

The swim was going really well, and I was trying to count my left turns.  Every now and then I would head off after the wrong yellow, and Eddie would be patiently waiting for me to surface and re-locate him.  He also did a sterling job at keeping people from getting between me and his socks.

I had counted either 3 or 4 turns, when all of a sudden we were on the shore.  Apparently one of the marker buoys had been blown away, and due to the worsening of the weather, the course was cut short.  No sprint finish for us I’m afraid, but one heck of a swim.  I don’t know what the final distance was, but I know we did 2 circuits, and whatever it was, it was probably one of the roughest open-water swims I’ve ever done and I can’t wait to do it again!  Maybe I’ll see you there next year? 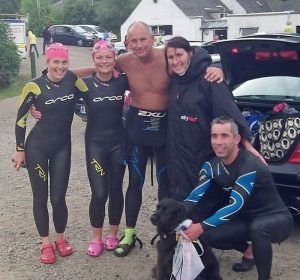 I would like to say a HUGE thank you to Eddie “the fish” Riach, (who has yet again volunteered to guide me, this time in the Lamlash Splash on the 21st of September).  Without him, the swim would not have been possible.  Thanks Eddie!  I’d also like to thank the organisers of the Monster Swim for allowing me to participate, and finally say well done to everyone who participated in the Monster Swim 2013, (especially Rhona, Julie, and Jenni).  I think it is safe to say that this year’s swim was definitely a “MONSTER SWIM”!

If you have any good “action” photos from the 2013 Monster Swim, and you’d be happy for them to appear on this page, please contact us.  We will, of course, credit you under your photo, if we use it.