Scad Diving. What a blast!

Scad Diving started in Germany around 5 years ago, using a helicopter and a safety net. It has been around in the UK for the last couple of years, (unfortunately without the helicopter, due to British safety requirements), but has never been greatly publicized. Now that the guys at Drop Zone UK are running it, things are beginning to change! 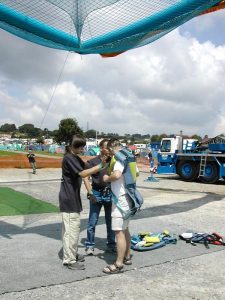 What is Scad Diving? Apart from being one letter away from very messy, Scad Diving is all about being dropped from around 50 metres in the air into a suspended safety net. If that doesn’t tickle your fancy, then maybe the fact that you are totally freefalling, (no bungy cord, no parachute), and reaching a speed of over 90 kph may just do it! 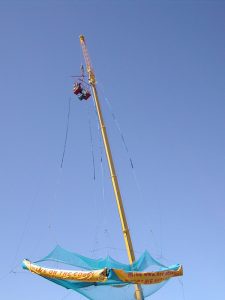 Drop Zone UK are the guys who run Scad Diving in Scotland, England and Wales. They have a great crew, full of fun and enthusiasm.

A lot of the work that Drop Zone UK do is for charity. People want to do something a bit different to raise money for charity, and Scad Diving is very different! 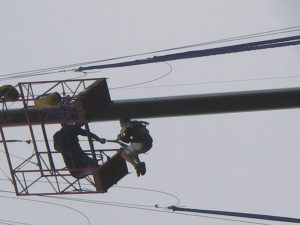 They also travel around the country to all sorts of festivals and shows, such as Truck Fest, etc. I met up with them at the National Adventure Sports Show at the Royal Bath & West Showground near Shepton Mallet, in July, 2002.

When I first saw the crane with the net suspended below, I got quite a surprise. I had seen lots of photographs before, but they did not do it any justice. The whole thing seemed a lot bigger than I had initially thought. Bonus!! 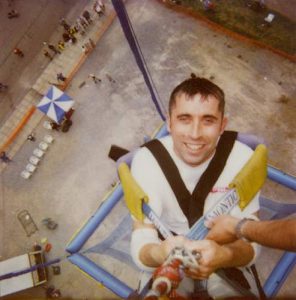 After watching somebody diving, my adrenaline really started to kick in! I couldn’t wait to get up there and have my go!

I went over paid my money, signed the usual disclaimers and waited for my turn.

Whilst waiting, I was given some safety gear. This included my harness, which is a bit like a paragliding harness and some elbow pads. Once all the kit was tightened and tweaked, it was time to get hooked up. I was attached to the cage and it was time to head onwards and upwards. The cage is designed so that there is a floor with a large gap in the middle where the potential diver hangs through. Also in the cage were two crew members. They are there to keep an eye on you and make sure everything is alright. They are also in charge of the release device. 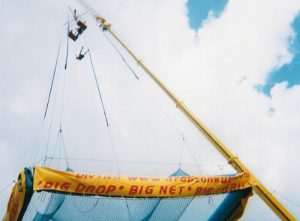 Once at the required height, I had my photo taken. A few last minute checks were made, I had a quick look around and all of a sudden I was dropping! Wow!! I could feel the air rushing by me and it felt like I was dropping forever. The next thing I knew, I was in the safety net. It was all done. The safety net was lowered to the ground and I was helped out. All the crew came over to see how I felt and help me out of my kit. The atmosphere was electric. They must have seen a thousand dives, but made my dive feel very special. What a crew!!

Scad Diving is something that I will definately be doing again! If you get the chance to do it, go for it! Not only can you have a good time, but you can raise money whilst doing it. Check out Drop Zone UK now! 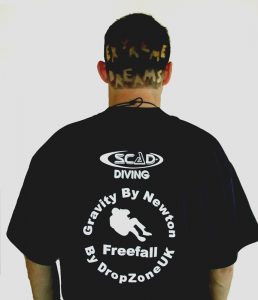 Their T-shirt says it all.