And it certainly was a challenge! 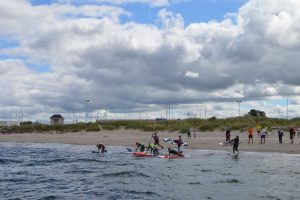 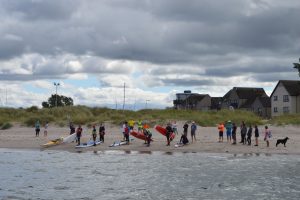 The course would be an 18km paddle from the beach next to Nairn sailing club, finishing at the bay at Findhorn.
There would be 2 starts. The first was for the touring kayaks, SUPs, and proneboards, and an hour or so later, the second group would start, consisting of surf skis and performance kayaks.
There were 3 SUPs, including an old friend Tom Wakeford, and the 3 proners would be the same 3 from the trip I took further up the Moray Firth 6 weeks earlier – James Fletcher, Caorann Fosbrooke, and me). However, the last paddle had been a “social” paddle. This time it was a “race”. Obviously I couldn’t do this sort of thing on my own, so luckily, my good friend Piotr Gudan agreed to join me, guiding me from his kayak. 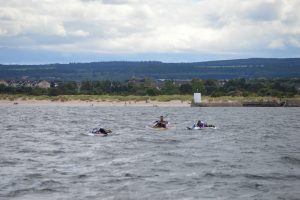 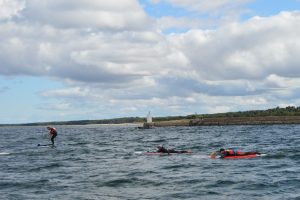 Starting from the beach, we were to paddle around 300m out to a buoy before turning right and east along the shore. This first section was directly into the waves, so within a few seconds, all 3 proners were drenched. As we turned right, we hoped to have the waves and wind push us along the coast towards Findhorn, but this was not to be. Instead, the wind came at us from our 8 o’clock position, bringing with it some good sized chop, which kept trying to push us onto the beach. For the next two and a half hours, every couple of minutes, I’d hear Piotr say “go left a bit”, or “left, left, left”. I’d set myself up on the right course, put my head down, start to paddle, try to get a good rhythm going, and then I’d hear “left, left, left”. Poor Piotr. I don’t think he ever got himself into a steady pace, before he’d have to stop, and re-direct me. 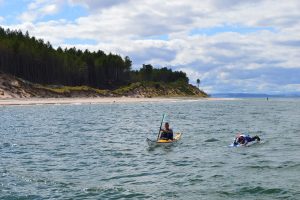 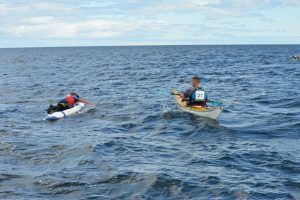 On one of those left turns, I must have been perfectly parallel with the waves, because all of a sudden a big wave hit me, flowed straight into my left sleeve of my t-shirt, across my chest, and out the right one! Very refreshing.
People who know me, know that I’m quite comfortable with the cold, but can’t take the heat. Well, the sun came out to join us, bringing the temperature up to around 21 degrees, so I knew that I’d be taking a few dooks. Sure enough, by 9km, I was melting, so told Piotr that I was going in. It was so nice to just roll off the board and splash. I’d tread water and dunk my head under for about 30 seconds, then climb back on board, sort myself out and start again. I ended up doing this at 9, 12, and 15km. 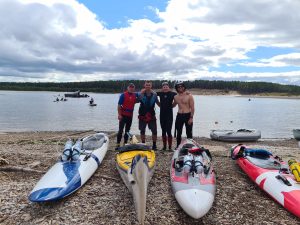 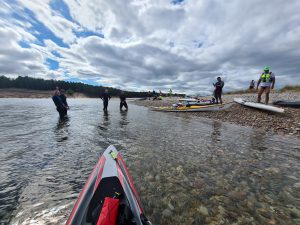 At about 1km from the end, I had my head down and I was pulling my left hand through the water when I felt my hand go into what felt like a ball of fur. Then my finger hit something squidgy. I got a fright and told Piotr. He then told me that we were surrounded by lots of seals, and that I’d probably just touched one. I’m not sure if I had just poked a seal in it’s eye, nose, or the other end, but if you see a seal with an eye patch, or a funny walk, near Findhorn, please pass on my apologies!
As we entered the bay at Findhorn, we’d been warned to hug the right shore, as the tide was now heading out and would be too fast to paddle against. Under Piotr’s guidance, we paddled from eddy to eddy, until we needed to cross the bay to the finish line. Again, with Piotr directing me, we turned a sharp left, and we went for it. Again, with Piotr telling me when to speed up, and when to slow down, (as we hit the odd eddy), we finally crossed the finish line. 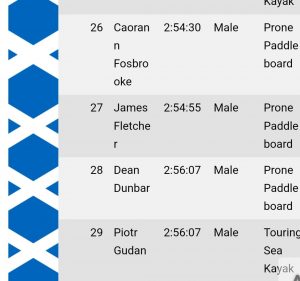 Knowing how quick James and Caorann are on their boards, I knew I’d come in third. However, I had thought that I’d be a good 15 to 20 minutes behind them, so was very happy to find that there was less than 2 minutes between 1st and 3rd place.
I had a fantastic day, and it was good to hear that a lot of the other paddlers also found the conditions challenging.
It was great to see old friends and make some new ones.
Thanks to the organisers for allowing me to enter, and to Davie Walker, Caorann, and Piotr for the photos. Also thanks to James for giving me the heads up on the race, and good luck to Caorann for his upcoming challenge, (see https://www.crowdfunder.co.uk/p/100-mile-prone-paddle-for-surf-therapy). And last, but not least, one massive THANK YOU to Piotr for all of his help in making this paddle possible! I couldn’t have done it without him!