The “SUP 11-City” is not only Europe’s longest running stand up paddleboard event, (started in 2009), but also Europe’s longest non-stop course.  It is based in Friesland in the Netherlands and covers a distance of 220km. 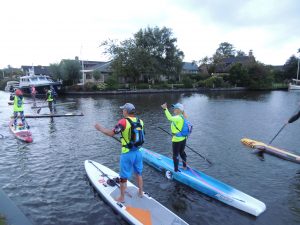 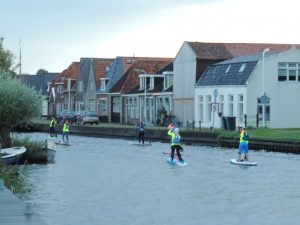 I was incredibly lucky to have the awesome Joanne Hamilton-Vale as my sighted guide.  Jo is one of the worlds’ top female long distance paddlers, and had already done the 11-City 4 times.  In 2013 and 14 she did the tour, and in 15 and 16 she did the non-stop.  However, she did have a tendency to get lost.  In fact, whenever I told anyone who knew her that she was my sighted guide for the 11-City, they all said the same thing, “Watch she doesn’t get you lost”. 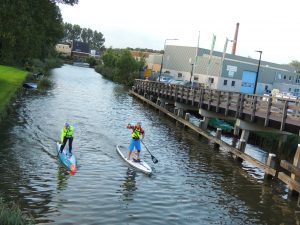 2017 was to prove to be one of the toughest years for the 11-City.  The weather was horrendous, with gale force winds, torrential rain, and the odd thunder and lightning storm thrown in. 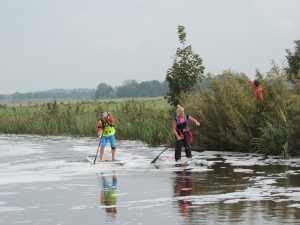 This weather was to take its’ toll.  The tour was cut from 5 days to 4, and out of the 15 paddlers who started the non-stop, only 8 would cross the finish line. 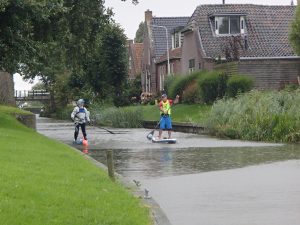 During our paddle, Jo and I experienced torrential rain which made it almost impossible to see, and winds that would almost blow us off our boards.  One minute we would have a tail wind pushing us at speeds in excess of 9kmph, and the next 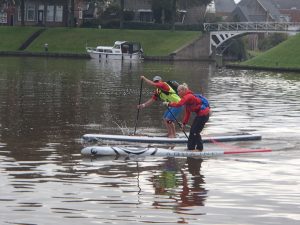 minute we would paddle around a bend and have these tail winds now hitting us head on.  On one section, we were forced to kneel down, as when we stood up we were continuously blown backwards.  Even on our knees, we were still only able to do 0.5kmph.  This weather was punishing, but it was not what brought about my downfall. 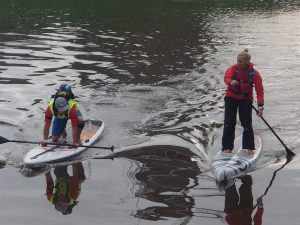 Around 10 hours in, we left a sheltered canal section, passed under a bridge and turned left on to some very lumpy and fast moving water heading towards Dokkum.  This was a section of around 12km, in which the current was with us, and so too was the wind.  Without putting our paddles in the water, we were doing over 9kmph.  Things were looking good! 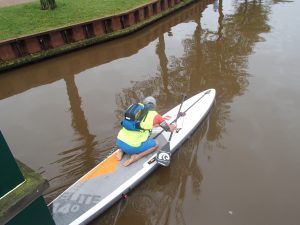 The organisers had set a cut-off time at Leeuwarden.  Paddlers had 19 hours to reach this point.  Anyone arriving after that would be pulled off the water, as they would be too far back to complete the course in time. 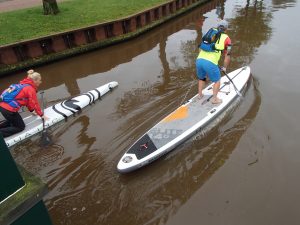 I had worked out that we should be at Leeuwarden around midnight, 3 hours before the cut-off.  Added to that, the foul weather was just like being back at home in Scotland.  (I’ll take the cold over the hot any day.)  I was feeling very strong, both physically and mentally.

Around 5 or 6 times a day I get a thing I call my “lava lamps”.  A neon blue blob, with a white edge appears across the top of my eyes.  The blob stretches, splits, stretches again, and eventually blocks off my vision.  This leaves me blind for 2-3 seconds at a time.  I was now getting them every time I blinked.  The solution was to stop blinking.  After 20 minutes of this, I started seeing large white discs.  (This was a new one on me.)  One by one the discs filled my eyes until I couldn’t see past them.

No matter how hard I scrunched up my eyes, my sight would not return.  I started to get very scared, wondering had I overdone it, and now lost my sight for ever.

I told Jo what was happening and that I needed to get off the water straight away.  She told me that we could get off next to Rhona and Andrew.  As far as I knew, we wouldn’t see them until we reached Dokkum, over an hour away.  There was no way I could continue paddling until then.  I needed to get off now.

Jo told me that she had spotted Rho and Andrew and they were just around the next bend.  (They had stopped to take photos of us as we went past them.) 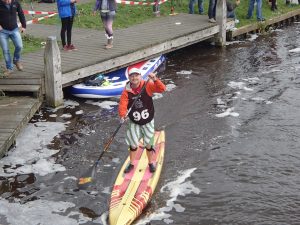 Jo verbally guided me to where they were waiting, and the next thing I knew was that my board had hit the banking, and somebody had grabbed my arms, and was lifting me off my board and onto the bank.

After 20 minutes the white discs cleared up, but the lava lamps did not.  I had to make a decision whether to carry on or call it a day.  With much sadness and frustration, I chose to end my race after just 11 hours on the water.  (This proved to be the right decision, as the lava lamps continued for the rest of the night and my “normal” sight didn’t return for 3 or 4 days.)

As the great Scottish poet Rabbie Burns once wrote in “To a Mouse”, “the best-laid plans of mice and men go awry”.  I had trained hard, had the inspirational Jo as my guide, the awesome 2018 14’ Red Paddle Elite board, (the only inflatable on this non-stop), and was wearing the wonderful Palm clothing to keep me dry and cool in these conditions.  But with all of those “best-laid plans”…

I’m really glad to say that my sight returned in time for me to paddle the 5th day of the tour with Jo, and do the 29.2km in a respectable time of 3 hours and 52 minutes. 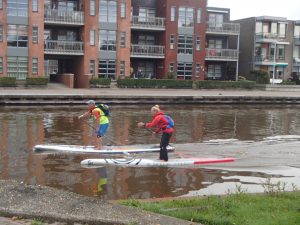 Although the outcome was not what I had hoped for, the event was awesome.  The organisers, supporters, and even strangers walking and cycling along the canals were wonderful.  So wonderful in fact, that I intend to return next year for the 10th anniversary event, where I hope to complete the non-stop.  A new strategy is required, and plans are already in motion.  Hopefully see you all there in 2018!

DID WE GET LOST? As we paddled into Franeker, Jo said that there should be a sign telling us to turn left coming up.  We had a very strong tail wind at this point, so did not want to miss our turning, as this would mean us having to paddle back into this wind to find it.

After a few minutes Jo said that although she had not seen any signs, she was sure we had passed the turning.  I told her that if she had, I’m sure she would get a phone call from someone telling her so.  (This had happened on the previous occasions.)  Just as I finished saying that, her phone started ringing.  Over the next 5 minutes Jo received countless phone calls.  As we sat on the banking trying to work out how to get back up the canal, one of the organisers arrived and told us to carry on down the canal for another 200m and then turn left.  We could then join the correct course a few hundred metres along there.

We were later told that over the next hour or so, all of the paddlers behind us missed the turning too.  It seems that the sign had indeed been blown away.

We were also told that the route we took would be part of next years’ course.

So the answer to the above question is “no, we did not get lost, we were pioneers”! 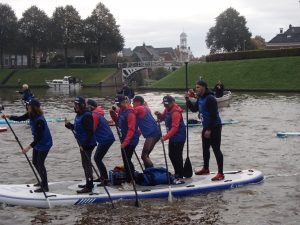