Gorg Blau, and especially Sa Fosca, are said to be amongst the top ten canyons in the world. Until the 5th of September, 2009, I had never heard of it. As we were walking away from our aquaseil of the Uk highest waterfall, on the 5th of September 2009, Ben, (of Vertical Descents ), mentioned that he’d heard of an awesome canyon on Mallorca, and asked if I fancied giving it a go. As I’m a guy who can’t say “no”, my answer was… 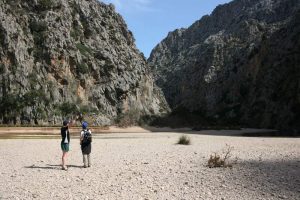 Deano and Rhona checking out the exit on to the beach.

The next step was to sort out team numbers, roles, and best dates.
Ben wanted to keep our group size to around 4. The larger the group, the longer the trip would take, and most reports had the trip length down to between 10-12 hours to complete, for groups of 3 or 4. 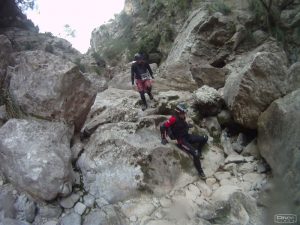 Early in the day. Into wetsuits now, but not as much water as expected.

It was going to be tough, so the team would have to be fit and strong, with good rope skills, and confidence in moving water. 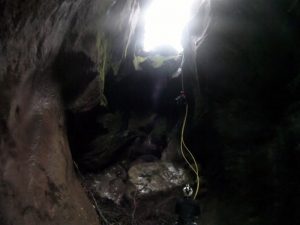 The team would be: 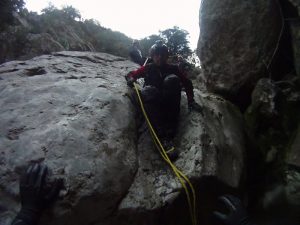 *Miguel was one of our friends out in Mallorca, and had done the trip a few times before. We wanted him to join us, as a friend, and as an extra rope man, but under the strict understanding that we were there to discover the canyon for ourselves, and not to give us any clues to what was around each corner. Miguel was happy to do this, and I’m sure he enjoyed seeing and hearing our reactions to this amazing place. 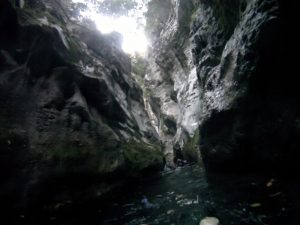 As well as the guys, Carrie, (Ben’s wife), Maria, (Carl’s girlfriend), and Rhona, (Deano’s wife), had also come along for the short break. They would not be running the canyon with us, but would hopefully be able to drop us off at the beginning, and pick us up at the end.

Thanks to our very good friends at Vent-i-Mar , (Tracy and Miguel), a lot of the local bits was sorted for us, e.g. accommodation, transportation, maps, information, etc 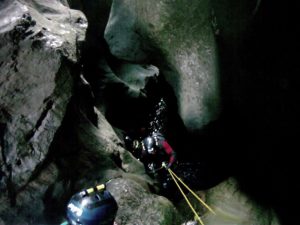 Deano abseiling ( some jumped this one!!)

On our first full day in Mallorca, we took a trip into the mountains, to get a feel for the area, and also to check out the entry and exit points for the canyon. This included a short walk up the Torrent de Pareis, which would be our last section.

After a good look around, and a check on the weather, we agreed that we’d hit the canyon the following day, Tuesday March 30th. Due to the time of year, and limitations of daylight, we’d need to be en route before sun rise. 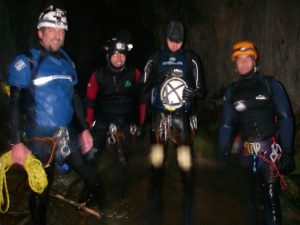 Ben, Deano, Carl and Miguel toward the end of the caves.

At 6am we were all up and getting ready to load up the car. By 7.15am, we were in the canyon. The sun was just starting to rise as we came out from the trees, and made our way across the dry section of the canyon. We were following a dry river bed, which contained boulders ranging in size from a football to a small family car.

An hour later, we were getting out of our dry kit, and pulling on our wetsuits, and off for our first swim. We entered the water from a 7 metre jump in, and for the next 4 hours we would be swimming, jumping, walking and abseiling along Gorg Blau, getting ever closer to “Sa Fosca”, (which translates into “The Dark Place”). 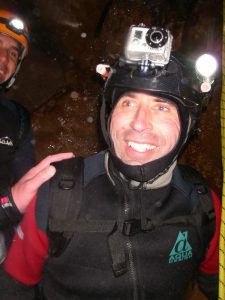 Deano at the bottom of the first abseil into darkness ( deep breathes now!)

Surrounded by cliffs of over 100m high, and travelling through gaps ranging from 0.5 – 5 metres wide, it was hard to see what was happening in the world above us. We could occasionally see strips of blue sky, and the odd bit of sunlight, but being this far down, in the shade, we could not feel the benefits of the sun’s rays. The water was freezing. The water constantly changed from being just a few centimetres deep, to several metres deep. There was lots of swimming, and when things got a little tough, we’d take off our rucksacks and use them as floats. All the time, following the direction of the water flow, and not knowing what was around the corner. On average, we’d have the ropes out every few minutes, abseiling down drops ranging from 5 – 25 metres. Sometimes these abseils would be dry, but most of the time, you’d be following the water. Not quite aquaseiling, but nearly. 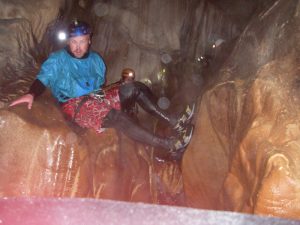 Just before midday we arrived at Sa Fosca. After a short break for lunch, we made our way to the abseil entry. Until then, I had envisioned Sa Fosca to be quite dark, but would at least have a bit of light coming in through a narrow gap in the roof. I was to be wrong. (You’d think that “The Dark Place” would have given it away, wouldn’t you?) Sa Fosca was totally underground! As I suffer from claustrophobia, this wasn’t a good place to be heading. However, we had passed the last “get out” just over an hour ago, and the only way out now, was to go through Sa Fosca. (Over three hours of underground canyoning.) 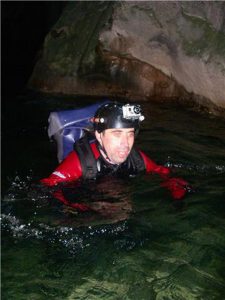 Deano swimming. Getting darker (but not into Sa Fosca yet!)

The entry entailed a 20m abseil, following a small waterfall. After doing this, I took myself off into a corner, and put myself into a “nice place”. This was a trick taught to me by a very good friend, Paul, who used to be in the Special Forces. He said that when times got tricky for him, he’d often grab a good memory, and think of it. Then whenever times got tough, he could mentally grab his “nice place”, and put himself there. This is exactly what I did, and for the next 3+ hours, I visited it on many occasions.Sa Fosca was an amazing place. It was fairly easy to navigate, as there was only one direction. Just follow the water. As if just being underground wasn’t testing my claustrophobia enough, we had to negotiate our way through and around some tricky situations. The first one was a small gap of around 50cm wide, and 50cm high. Ben had gone through it and was able to describe it and instruct me on what I had to do to get through. We had to get down on our hands and knees and crawl through this hole, backwards. On the other side of the hole was a 5 metre waterfall leading into a new chamber. I had to crawl through, until my legs were dangling over the edge. From here I would then try to find a foot hold, and then bring the rest of my body through, to start the abseil down into a deep pool. Once off the rope, it was a case of swimming to the edge and treading water until everyone was through. 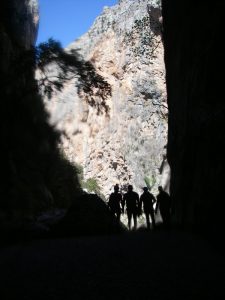 Another tricky one involved a sump. This meant that the only way through was to dive down, and swim under the rock, to come out the other side. For this, Ben helped me, by putting his leg through the gap, so I could find his foot. Once I had hold of that, I started to swim along it, whilst he brought his leg back down, beside the other one. Once his legs were together, I then swam past them, and headed upwards to join him in the next chamber.

There were many more obstacles that we encountered, but with the help of all the guys, and the occasional trip to my “nice place”, I survived, and my claustrophobia didn’t get too strong a hold on me. 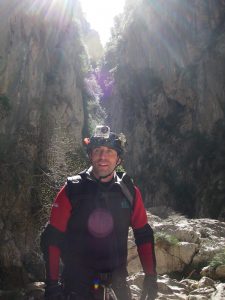 Deano into the light once more. (sa fosca finished)

After 3 and half hours in Sa Fosca, we finally made it out into daylight again. Yippeee!! From here, we got out of our wet kit, and congratulated ourselves for “a job well done”! However, the trip was not yet over. We still had another 3 hours ahead of us, to walk out. I would imagine that most people could probably do this section in under 2 hours, but unfortunately this section was very visually challenging, and the team had to go at the pace of the slowest member. That was me. Ben and Graeme headed off to make sure we were heading in the right direction, and Carl and I stayed at the back. Miguel would keep going between us, to make sure all was well. This section was very tough for me. As you can see from the pictures, we were walking through a boulder filled gorge. These boulders varied in size from the size of a football, to the size of a house! Carl had to pretty much tell me where to put my feet, nearly every step. It was hard for me, but must have been really tough for him. Not only was he watching where he was going, but he was having to work out what I was about to do – right hand out, left foot down 50cm , ass slide 1 metre down, stop, right foot up, etc, etc. 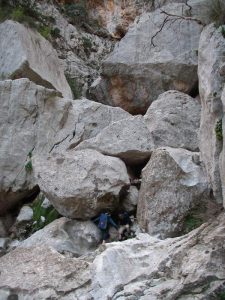 Now for 3 hours of boulders to the beach. 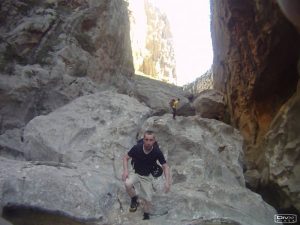 and even bigger boulders, surely the beach is around the next corner!!

On behalf of the team we would like to say a huge THANK YOU to Tracy and Miguel, of Vent-i-Mar , for all of their very generous help. And on a more personal level, I’d like to also say thanks to Ben and Graeme for inviting me on this trip, and to all 4 guys for looking after me. 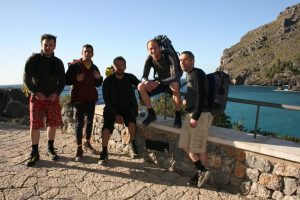 Team Photo at the end. ( now for the biggest endurance event of all..finding Ben a toilet!!)