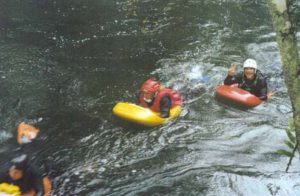 White water sledging, (also known as hydrospeed in Europe or river boarding in the US). is a littlie bit like bodyboarding. But instead of having the wide open sea, you travel down rivers. I have been told that the origins of white water sledging came from the Alps. This is a sport that I had found on the internet and had planned to do at some time. Whilst traveling in New Zealand, (the mecca for extreme sports), I got my chance! 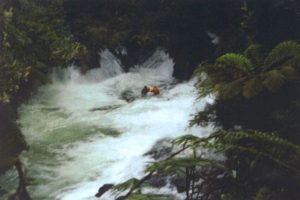 I had found a book, “Extreme NZ” by Alison Dench, that detailed different extreme sports in New Zealand that are available to the public.. This book said that the guys at Kaitiaki Adventure did white water sledging. I phoned them up and told them about my lack of sight. This did not put them off, instead they took it as a challenge!

Stevie and Mark came and picked us up from our campsite and drove us, in their bus, to their centre to get ready. 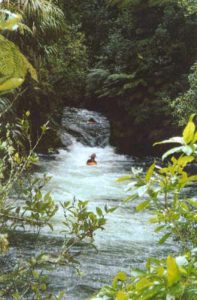 Before getting kitted out, Mark took me through all of the safety aspects of the sport. This included how to travel around tight bends, over shallow sections of the river and down waterfalls. In the bus there had been a laid back atmosphere, but for the next twenty minutes it was very serious. These guys took their sport very seriously. 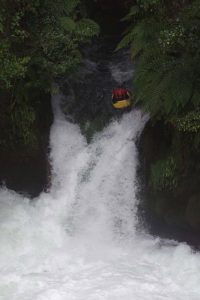 As with any river, the Kaituna has some areas that need more care than others. They continually sledge the river and know exactly where the danger spots are. When they come across them, they throw themselves in and see what happens. This sounds crazy, but it means that they know exactly how to deal with a situation if somebody gets into difficulty. These guys have thrown themselves into the plunge pools at the bottom of waterfalls to see how the body reacts and how to carry out a safe rescue. There are not many companies who go this far to ensure client safety. 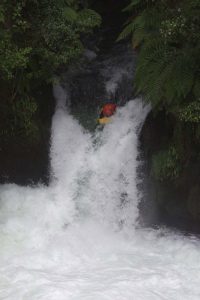 After the safety talk, it was time to get kitted out. As it was the middle of winter, I was given a couple of warm layers to wear under my wet suit. When I put the wet suit on, I felt like the Michelin Man. Most winter wet suits are around 5 mm thick. This suit was 10 mm! On top of this I was given a life jacket, gloves, fins and a helmet that would not have looked out of place in an American Football game. With all this protection, I was ready for anything. 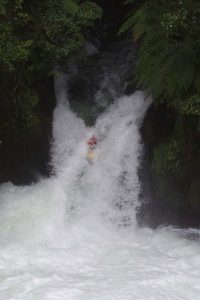 Now it was time to get wet. The river we were going down was the Kaituna River. This is a very holy Mauri river, so a prayer was said before we entered it.

We had a few practise drills in a still part of the river before embarking on the main trip.This included how to enter the water, with a dive, and how to steer, etc. The main rule is not to let go of the sledge. The sledge offers flotation and protection, and with the upcoming trip you wanted as much help as possible! 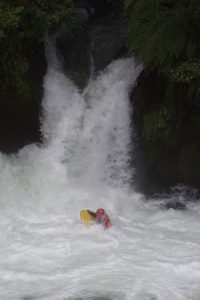 After the practise drills it was time to go for the real thing. Because it was winter, there were no other takers for the trip, so our group was made up of 3 staff and me.

We entered the fast flowing river with the customary dive and were off. The trip was split into several sections with stops en route. At each stop they checked that I was happy to go on and warm enough. The adrenaline was keeping me warm. 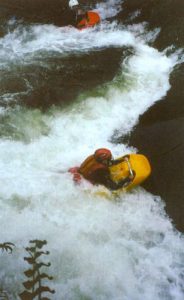 The trip lasted around an hour and a half and covered grade 5 rapids, several weirs and 3 waterfalls ranging from 1 metre to 7 metres. With the waterfalls, you have to drive the sledge deep, in order to get under the re-circulated water at the foot of the falls. When we got to the weirs it was time to do some weir surfing.. This means traveling along the weir sideways, whilst facing into the fast flowing water. This was really hard as the water tries to rip the sledge from your grip. Hard work, but a lot of fun!! 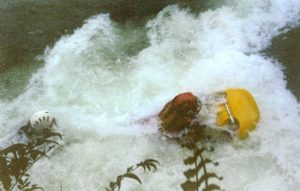 This was my first go at white water sledging, but it certainly wasn’t going to be my last. Since then, Rhona and I have bought our own sledges and have taken a few runs down the River Tummel in Scotland. We enjoy it so much, that we now sell them on our online shop!!

White water sledging is an amazing sport, and if you ever go down to NZ, check out the guys from Kaitiaki Adventure.

Marks out of ten? Eleven!!are the guys I sledged with and I can’t recommend them high enough! If you go to NZ you’ve got to try them out!!