Whilst travelling in 2001, I had my first and definately not last, go at snowboarding. Rhona and I went to the Cardrona ski resort, a couple of hours from Queenstown in New Zealand.

We had been staying in Queenstown for a couple of weeks and had tried a couple of the local ski resorts. They had been so popular,that there was almost no room to play. The problem for me with this is that with so many people moving around me, my eyes are constantly re-focusing. This meant that I couldn’t see a thing! As I had never snowboarded before, we decided that this was going to be a problem. Rho and I spoke to a guy at one of the local ski rental shops about this and he recommended that we should try Cardrona. He also suggested that I should speak to the Ski Patrol when I get there and see what they think. 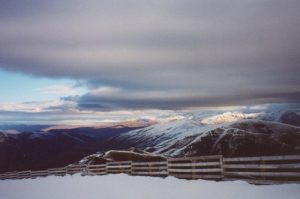 The great thing about New Zealand is that the people there are really into their sports, so getting to and from sports locations is a doddle. They had busses that ran from Queenstown straight through to Cardrona.

On arrival I went straight to the Ski Patrol and explained my situation. They suggested that I should wear a vest, that they supplied, with the words “BLIND SKIER” on the front and back, on top of my jacket. They told me that this was more for the benefit of the other skiers around me. I must admit, I wasn’t very keen to do this, but thought I would give it a try.

Once onto the slopes, I put my vest on and began to practise my limited skills. Because I have done some other board sports, ie skateboarding, surfing, etc, it wasn’t to hard to learn the basics. Once I was comfortable with this, I headed off for the ski lift and the big slopes. As I stood in the queue I could hear people talking about that “poor blind guy”. This niggled me a bit, but I decided to try to ignore it. At the top of the lift I stepped off and strapped my feet onto the board. Rhona had come with me for my first downhill, just to take me through the route.

As we headed off I could hear more people talking about the vest. I was starting to get paranoid. Then as I gathered speed and Rhona would shout directions, I realised that the people who saw the vest were getting out of my way. Fantastic!! This was better than a white stick in a crowd. We picked up speed turning left then right, hitting a few bumps, but mainly going really well. I even managed to control the snowboard. Well, sort of control it. Before I knew it, we had zipped down a long straight and had come to the end of the run. The adrenaline was buzzing and I was “high as a kite”. What a feeling. I got back on the ski lift and headed back up. This time I was going to do the run solo!

These 2 photos were taken near Blairgowrie, Perthshire, Scotland.
Rhona is in the red, and I am in the blue.
We are using an old sandboard, as we didn’t have our own snowboard at that time. 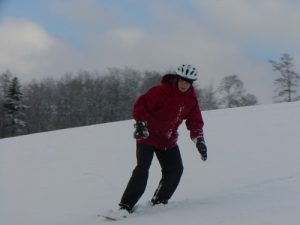 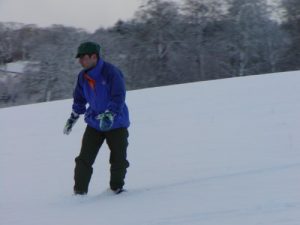 I had memorised the slope from my first run and felt very confident. As I came off the lift, I rushed to get started. Again, I could hear people talking about me, but now it didn’t matter. The vest was a definate becefit for this novice snowboarder!

I took the first stage at a steady pace, looking for my first left bend. No problems there. I found that one easy enough. I was now looking for my fast approaching right bend. Unfortunately, I missed this one completely and ended up in the safety netting at the edge of the run. If htat hadn’t been there, I would have been the first blind BASE jumper, (without a parachute)!

At this point, I decided I was not the world’s best snowboarder and would have to take things a little slower.

As the day progressed, so did my skills. I had a great time. Even taking “air” on quite a few occasions. However this was not deliberate! I was now very wary about that bend I had missed, so started to take it a bit early. Unfortunately, this meant that I would leap into the air at about 2 metres off the ground. And what was more surprising than being airborne, was the fact that on half a dozen occasions, (out of about 30), I landed on my feet and carried on downhill. The rest of the time I fell onto my arse. I heard some people comment on how brave “that blind guy” was. Little did they know it was lack of skill rather than bravery. 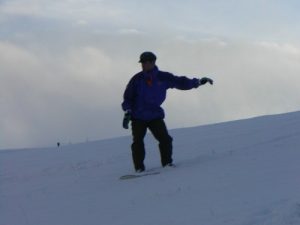 We skied/boarded at Cardrona for two days and had a fantastic time. Because it is a bit of a drive away from most of the tourist places, it is not as busy as the other ski resorts. It is mostly visited by the locals and I think that says something. If you get the chance, I would definately recommend Cardrona. I would also like to thank the Ski Patrol for that great suggestion. Without the vest, I am sure there ould have been some crashes, caused by me. But with the vest, everyone just got out the way. However, I think that if I was to get a vest for myself, it would proably read “BLIND & DAFT”.