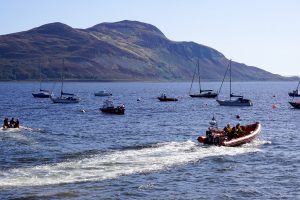 This would be my 5th Lamlash Splash, and Rhona’s 4th, but it was also going to be a 1st for both of us.

The Lamlash Splash is a 1.3mile wetsuit sea-swim from Holy Isle to Lamlash on Arran. It is a fantastic wee event, partly due to the wonderful location, but also due to the fact that there is a limit to the number of swimmers allowed. 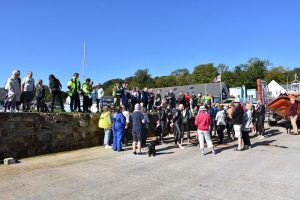 The event capacity is kept to 40 swimmers, with 10 places being reserved for Arran residents. Some people treat this as a race, but most consider it just to be a personal challenge.

Another aspect that makes it so special is that as each person finishes the swim, they don’t disappear off to get changed, but wait to cheer the rest of the swimmers in, along with the many spectators who line the pier at the finish line.

Obviously Rhona has guided me on many of my different activities, but swimming wasn’t one of these, as we have very different paces to each other. 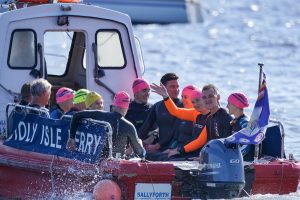 Our only training took place 4 days before the Splash, when Rho donned the neon yellow socks. Unfortunately the water in Clunie Loch is not that clear. This meant that I had great difficulty in seeing the socks, and 9 times out of 10 I would touch them before I could see them. The good thing with the Lamlash Splash is that it normally has very clear water.

As with previous years, my guide and I were given different coloured caps to the other swimmers. Our yellow caps would make it easy for the many safety kayakers and RNLI folk, to recognise us amongst the other swimmers who were wearing pink caps. And if that wasn’t enough, we were also accompanied by our very own safety kayaker, the awesome Annie!

After the main briefing, everyone was ferried over to the Holy Isle jetty and the start line. Here we had one final briefing, pointing out directions, landmarks, etc. then it was time to enter the clear, cool water.

It had been agreed that Rhona and I would start after everyone else, as we didn’t want to get in the way of any of the competitive swimmers. We waited 5-10 seconds for everyone to start and then we were off. 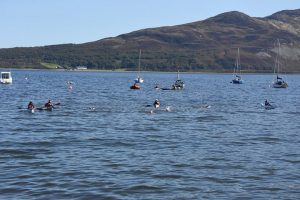 Fortunately the water was much clearer than in Clunie, and I could see the socks.

For the first part of the swim the water was sheltered from the easterly wind by Holy Isle, but as we left it’s shelter, the water started to get a bit lumpy.

It was great fun! Rho picked a fantastic line and I did my best to follow her. It isn’t easy gauging distance under water, so sometimes I would punch Rho’s feet, other times I would find them in my face. 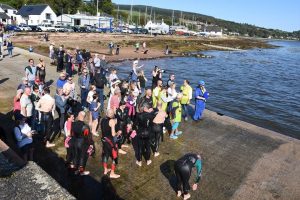 As we came into the last 3rd of the swim, the water became murky, and the socks became much harder to spot. This was when I had to call on Annie to help out, which she did perfectly. I’d stick my head out of the water, and Annie would shout a direction, I would then open up for a few strokes, and bang, there was a foot in my hand or a sock in my mouth! Bingo, back on course!

We finished the swim with Rhona getting her new personal best for the Lamlash Splash of 51 minutes and 50 seconds, and us coming in at 27th position. 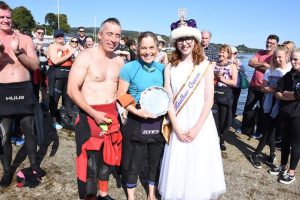 To top it all, Rho and I were awarded the Ali Bodie memorial prize by the Heather Queen, Imogen Allison. It is awarded to the swimmer who showed the most courage and determination to complete the swim, but I believe we were given this for Rhona being such a superstar guide, and for me occasionally sucking a sock!

Thanks to the organisers, RNLI/Coastguard, safety kayakers, boaters, and the many wonderful people who make this event so special!

Thanks also go to Natalie at Unfolded Moments Photography, and Colin at The Arran Banner for letting me use their wonderful photos!

It’s looking like we’ll be coming back again next year to see if we can top Rho’s PB. See you all then!!!