In 2005 we completed the Hebridean Challenge, (a gruelling 5 day adventure race). In 2006 we mountain biked The Great Glen Way, and I also set a speed record in a Thundercat powerboat around the Isle of Wight.

So 2007 was upon us and no master plan had been drawn up. After a few pushes from Rhona, I came up with the plan to hydrospeed the River Tay.

They call it hydrospeeding in Europe, white water sledging in New Zealand, and riverboarding in America. (The sport is the same, but the crafts are slightly different. The idea is that your upper body is laid on the craft and your lower body is in the water. The rider wears fins and powers the craft through the water by kicking their feet.) As we are in Europe, we’ll stick with hydrospeeding.

A hydrospeed looks a bit like a bodyboard on steroids, and they first came about after some rafting guides, in the Alps, laid on a bundle of buoyancy aids and headed off down the rapids. With a proper design, and a few tweaks, the hydrospeed was born!

The River Tay is the longest river in Scotland, (approximately 75km), and was pretty much on our doorstep. We had played on parts of it in the past, in duckies and kayaks, with the guys from Nae Limits. 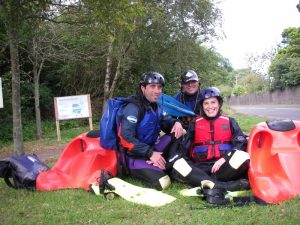 It was a big trip and included a few big rapids.  Some of these rapids were too big for Rhona and I to take on alone, so we needed a “River Pro” on board. We thought that the best guy for the job was John Strang of Nae Limits.

John has been playing in most of the rivers in the area for many years, and as a safety boater and guide, he was perfect for the job. As soon as we discussed the possible trip, we contacted John and asked if he would be able to help. Without any hesitation, John said he would love to help out, both with safety boating and guiding, but he would also supply us with some white water training. This training included how to travel through the white water, as well as white water rescue techniques. We asked him about the big rapids – the Boneyard to Grandtully, and Kinklaven to Thistlebrigg – and John suggested that he guide us through these, as they were too dangerous for rookies like us.

Over the next couple of months we slowly started to put in some mileage on our hydros. Starting off with small trips on local lochs, then onto the River Isla for an 8.5km trip, slowly building up to 30km trips on the River Tay.

As well as putting the miles in, we also had to tweak our kit. I spoke to the guys at Kaitiaki Adventure in New Zealand, (these are the guys I did my first white water sledge trip with), and they suggested that we swap our bodyboard fins for some dive fins. Dive fins were going to be of more help on such a long distance trip. I then contacted Mike at Mike’s Diving shop and asked for his advice. He suggested a rugged dive fin. After our first couple of trips with these new fins, we found them to be quite painful across the top of our feet, and put using them, on this trip, in doubt. There was a hard plastic piece that seemed to move slightly and it looked like this was the cause of the rubbing. When I contacted Mike and asked him about this, he told me that it was only there for packaging and was designed to keep the shape of the fin, whilst on display. It was supposed to be removed before use. Sure enough, on our next trip, without the plastic thingie, the rubbing stopped! Well, Rhona and I can probably say that we are the first people to travel 60km with this still in place!! 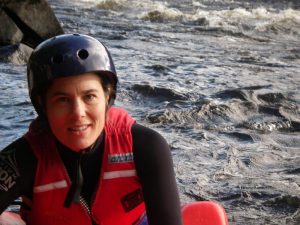 Day 1, (September 1st, 2007). We started our trip by putting in at the back of the Kenmore Hotel, (the top of the River Tay). Unfortunately for us, there had been very little rain over the previous few weeks, and the river level was extremely low. It was so low, that in a couple of places we just picked up the hydros and walked through the 2 inches of water. Also, with the river level being so low, this meant that the river was running very slow. When the river runs slow, we have to work hard, just to keep going. So from day 1, we knew it was going to be tough.

To add to this, within 3 hours of starting, I managed to hit a rock, which forced my hydro into my chest, hitting my folded safety knife and cracking a rib. Ouch! That was extremely painful. By lunchtime the pain seemed to be getting worse, and my swimming ability had been majorly reduced. At lunch, Rhona gave me some painkillers and we prepared for the next section of the river. John was coming to guide us through this section – the Boneyard to Grandtully – as this was our first batch of big rapids.

John would paddle at the front, with me trying to watch his line and follow him. Rhona would then be behind me, watching both John and I, and hopefully avoiding any stoppers, rocks, etc.

This section was awesome!! Bouncing around, crashing through waves, going down drops, and generally doing very little kicking!! This is what the sport is all about. And for most of this section, the adrenaline and painkillers took over, and the pain was significantly reduced.

After we had come through Grandtully, it was back to the 2 of us. It was 2pm and we had been on the river since 8.30am, and had travelled approximately 16km. We still had another 22km to go that day, and we were back on the slow stuff. The next five and a half hours went very slowly, with more shallow sections and obstacles appearing due to the low water level.

By the time we finished day 1 it was 7.40pm and getting dark. We had been on the water for just over 11 hours and were completely knackered. That evening we struggled to get some food down our necks and were in bed by 9pm. 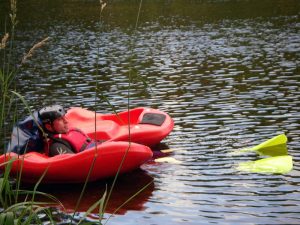 Day 2 started where Day 1 had ended – Dunkeld. Today we had 27km to do, with the first 20km moving very slowly, but the last 7km being a mixture of small bumps, whirlpools and huge waves. We entered at Dunkeld at 8.30am and met up with John, at Kinclaven Bridge, at around 2pm. John was going to take us down the last 7km, and hopefully guide us through the most dangerous parts of our trip. The first 2 or 3km had a few relatively small rapids, but then we arrived at Campsie Linn. This is a small section of river which looks fairly straight forward. However, looks can be deceiving. The river takes you through a short and narrow corridor between some rocks on river right and the banking on river left. As well as there being a drop and then a wave, there is also a whirlpool on river right. If this grabs hold of you, there could be trouble. John’s plan was for him to lead the way in his kayak, and Rho to be on river left and me to be on river right. The reason behind me being closest to the whirlpool was due to the fact that I am a very strong swimmer and that I have done more white water type activities than Rhona. Thus making me less likely to panic if dragged in. (Also, I did hear Rhona mention something about my life insurance being up to date.)

Sure enough, as we dropped over the edge into the Linn, I watched John rise and clear the wave. At the same time, I seemed to hit the wave and stop. I didn’t know if this was the whirlpool or not, but knew that I had to kick really hard now. After a 2-3 second stall, I was off again and out. Fantastic!!

From here it was on to Stanley for the next obstacle. This was a weir. The plan was to travel over this in convoy as we had in Grandtully, John first, then me and then Rho. However, just as we arrived, 4 hovercrafts appeared and were heading up stream. We waited for them to pass and then we were off. As I went down over the weir, I lost sight of John and took the wrong line. Bang! I crashed my right thigh straight into a rock. The pain shot straight threw me and for around 30 seconds I could not move my leg. I knew it wasn’t broken, but at the same time it wasn’t working either. I managed to make my way over to John and Rho and told them what had happened. We floated down the river until I could get my leg moving again. Just in time. As we turned the corner we met a mass of waves. This was great. I didn’t really have to do much kicking, just hold on and enjoy the ride. Some of those waves must have been 4-5 foot tall! You just held on tight and went along on the rollercoaster ride. Again the adrenaline kicked in and the pain in my leg was gone for a few seconds.

After this there were a few more rapids, and then it was down to Thistlebrigg. This was to be our get out point, but John had also promised that this would be the best part of the whole trip. For some reason, at this section of the Tay, the lower the river, the higher the waves! The river was extremely low and the waves would be mighty high. Sure enough, some of these cleared 5 foot, and again, it was all down to holding on and enjoying the ride!!

We finished Day 2 at 5pm on a huge high. If my leg and rib hadn’t been so painful, we probably would have jumped back in and done the last section one more time!! 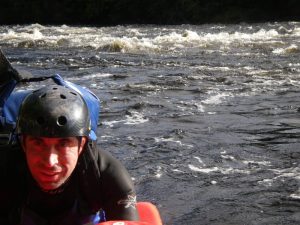 Day 3 was our last day and we had left just 10km to go.This was a fairly uneventful section, leaving from Thistlebrigg and arriving in Perth about 3 hours later. No big rapids, but lots of fishermen. One minute we’d be on river right, then a fisherman would appear and we’d go to river left. Then another fisherman would appear and he’d ask us to go to river right. We zig zagged our way to Perth.

At around 12.30, we arrived in Perth, and had completed our trip. 75km down the River Tay. It turns out that we are probably the first people ever to run the whole River Tay on hydrospeeds! After doing it, we can totally understand why nobody had done it before, and we’ve no plans to do it again. However we certainly will be back to play at Thistlebrigg!!

Between the two of us, we had picked up a cracked rib, deep muscle bruise to the thigh, countless bruises to our shins and more blisters than you can shake a hydrospeed at, but all in all, it was worth it!! 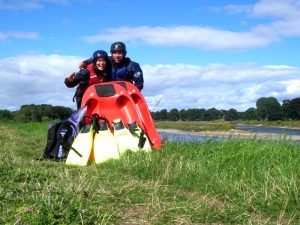 Rhona and I would like to take this opportunity to say thank you to everyone who helped us, especially our very good friend John Strang. Without him, this trip would not have happened. As well as the safety training and guiding, John also helped us with shuttles, to get to and from start and finish points. So, thanks John. You’re a top bloke!!

Apologies for the lack of action photos, but when we were in the middle of the big rapids, we certainly didn’t want to let go of our hydros to take a pretty photo!!