Earlier this year I bought myself a Skatewing. Some of you may ask “what is a Skatewing?”. The easiest way to describe it is to tell you that it is like a windsurf sail, but for land. Some people use it in conjunction with their inline skates, but I prefer to use it with my mountainboard. 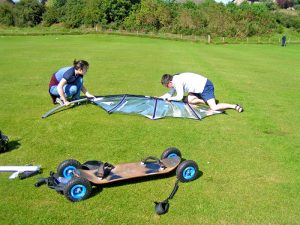 Rhona and I had our first go this summer, but had to call it a day, after the wind took hold of the Skatewing and bounced it off Rhona’s head!! Ouch! We hadn’t bothered to take any protective gear, and Rhona ended up with a huge lump on her forehead. From then on, helmets have been the order of the day!! 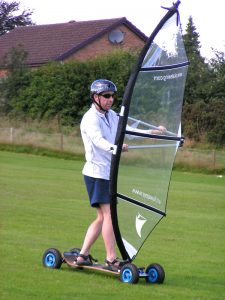 In late August, Jo and Nick (our friends from Surf Wax) came up for a few days. As they are the “Kite Masters” we were very lucky to get a windy afternoon. We took some of their kites out to play, and thought that this was too good an opportunity to miss to get the Skatewing out.

The area that we used, is a playing field near our house, which is regularly mowed (for the footballers), and has a slight decline with a small incline at the bottom. Ideal for our needs!! 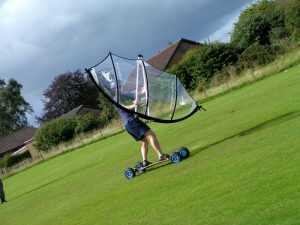 Once the wing was assembled, I was chosen to be the test pilot and test the power of the wind. With helmet on, feet strapped into the mountainboard, I was ready for action. Unfortunately the wind wasn’t. It was a bit gusty, so most of the time was spent waiting to catch the right blast. (It reminded me of the days spent waiting for the right wave to surf.) 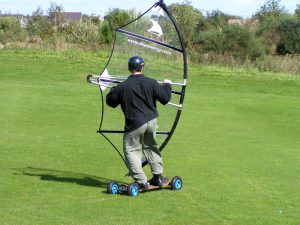 The first couple of runs were relatively slow. Rhona, Nick and I, all took turns, while Jo was head camera person. After a few runs, we started to play with different positions of the wing. We discovered that if you move the wing around, you could catch the wind and get a really good run. From then on, that is what we did. This made things a lot more exciting!! 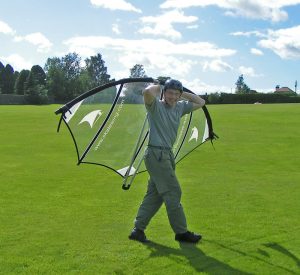 Nick found that if he held the wing high above him, he could catch a huge amount of wind. But as Nick is our answer to the Incredible Hulk, he was the only one who could hold the wing up for long enough! The rest of us whimps could only do this for a very short time, so we had to weave the skatewing around and catch what we could. (The wing is very light, but with the wind trying to take it out of your hands, you need to have a strong grip!!)Anyway, after a couple of hours, catching some great blasts, it was time to pack up and get the power kites out. 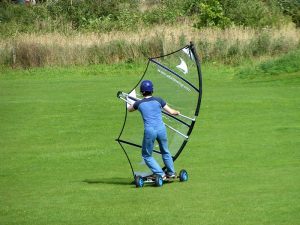 The Skatewing is great fun, and as we are now getting into the windier time of year, we will be out honing our skills. Its a blast!!