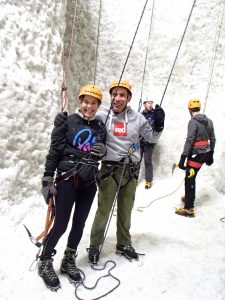 Last year Rhona and I both turned 50. (I know, it’s hard to believe it, with not a grey hair in sight – if you keep your eyes closed!) 2 of our friends gave us a very generous gift of a voucher for ice climbing at the Ice Factor in Kinlochleven.

In 2012, Rho and I had a go at ice climbing at the same place, and thoroughly enjoyed ourselves. 8 years on we were very excited to have another go! 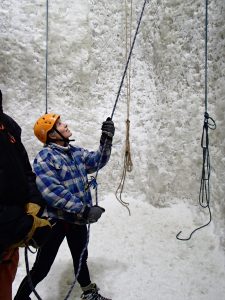 Our instructor for this visit was James, who was an excellent, and very patient, guy. Over the following two and a half hours, he showed us the ropes, (pun intended), and had us up various routes from the straight forward 4m high beginner’s wall, to the much harder 11+m high vertical wall, and beyond!

James also showed us how to set up the ropes and belay for each other. We would set up the ropes, James would give them a quick once-over, and then we would do our own belaying, with James keeping a watchful eye on us from a distance. 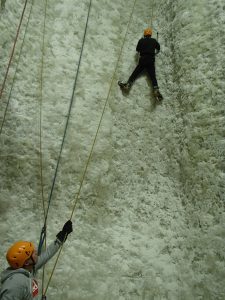 On one of the high walls I learned what a “barn door” was. This is when your foot and axe, (on the same side), fail to hold you, and your body swings out from the wall, only being held by the opposite foot and axe. (I did this several times.)

Also on this wall I managed to crack myself on the head, (fortunately I was wearing a helmet), with the blunt end of my ice axe, as the axe came loose, and I also punched myself in the face twice for similar reasons. At just over the 7m mark, I decided that 3 self-inflicted injuries in under a minute was a sign for me to take a breather, so I called it quits on that climb and headed back down. 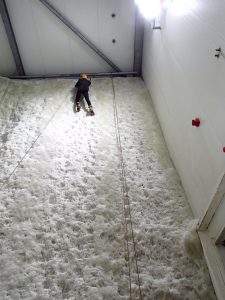 One of the many reasons I love Rho is that she is a very determined lady, and she proved this time after time on these ice walls. When she fell off, she would swear, take a second to sort herself out, whack the ice axes back into the wall, kick in her crampons, and off she would go again. On every climb she attempted, she reached the top!

James told me about a more “technical” climb which involved traversing under a bridge. He did his best to describe it to me, but I couldn’t really get my head around it. The only way for me to find out exactly what he was talking about was to give it a go. For this one I would be attached to 2 belay ropes. Rho would belay for me as I climbed up the wall to the bridge. Then half way across the bridge, James would take over and help me reach the other side and come back down. 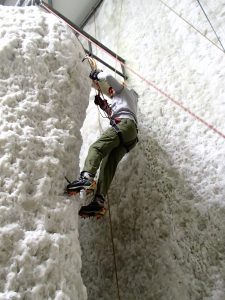 This climb was an absolute blast. At the top of the first climb, I had to reach over with my axes, and plant them into the side of the bridge. Then, whilst hanging below it, I had to straddle the gap, placing one foot on one wall and the other on the other wall. (It was then that I realised my harness was a tad tight!) Then, once both feet were on the other wall, it was a simple climb back down. 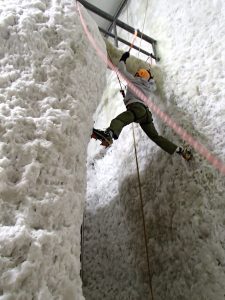 When the climb was over and I had put my ice axes into the wall, my wrists and forearms felt like they were going to explode! 2 days later, whilst doing some exercises, I could still feel it in my forearms!

What a fantastic day!

Thanks to Linda and Derek for the vouchers, and also thanks to Rho’s cousin Dougie who came along to watch and who took the photos.