HAVE INFLATABLE SUP – WILL TRAVEL

As some of you may already have read, I have a bit of a thing for Loch Etchachan. In 2012 I became the first person to swim the full length of the UK’s highest loch, after failing on my first attempt in 2011. So when I was looking at challenges for my SUP (Stand Up Paddle-board), Loch Etchachan had to be there.

At 5.45am on Saturday the 26th of July, 2014, the founding members of “The UK’s Highest SUP Club” got together. By 6am we were on the road heading towards Braemar and the Linn of Dee, and by 7.15am we were up to our eyeballs in midges. If you have never been to Scotland in the midge season, you have no idea how bad these little buggers can be. If there is the slightest chance of them finding some flesh to bite, they will find it. In your ears, around your eyes, and up your shorts!! 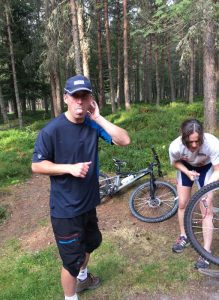 Those midges get everywhere!

The plan had been to get unloaded and get out of the car park, to make some space between us and the midges in just a few minutes. However, this wasn’t to be. My bike was one of the last off the Land Rover, and it was only then discovered that I had a flat tyre. It was OK when we left Blair, honest guv. How do you get a flat tyre when travelling on the roof, I don’t know, but there you go! Fortunately Wilfie was on the case, and within a few minutes the flat tyre was off and the replacement was on and Rhona was pumping it up. 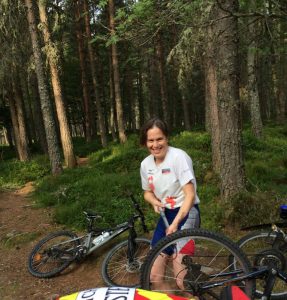 Rhona giving it some pump action

The route from the car park to Loch Etchachan included a 10km bike ride and 5km hike. The first 5km on the bikes was very easy going, but the second was pretty technical. This was made even harder for Rhona and Wilfie.

The Coreban Sonic SUP that I bought from Oceansource.net is an inflatable board, so packs down to a backpack sized package weighing in at around 17kg. This would be too heavy for us to wear on our back whilst doing a lot of the technical biking, so we invested in a bike trailer, and it was Rhona and Wilfie who volunteered to pull the trailer.

As well as the board, there were other things to carry such as the pump to inflate the board, the 3 part paddle, leash, and fin. All of the team helped in the portage of this kit, along with their own biking, hiking, and loch kit. 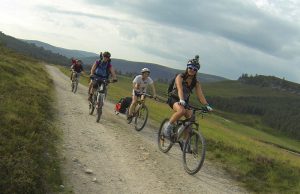 Biking in on the easiest bit of the trip

The first 5km was pretty straight forward biking, on a wide, well defined gravelly road. This took us to Derry Lodge, where there are some bike racks. A lot of hill walkers cycle to here and then walk in from the lodge, but as I am slower on foot, and more likely to fall over, we carried on cycling. The next 1km or so is up hill, and technical. The track is very narrow and has many run-offs running across it. Some of these can be ridden over, but many cannot. For these it meant getting off the bike and lifting the bike over.

Fortunately for me, different team members would take turns in guiding me from their bikes, either riding in front of me and telling me what they were doing, or from behind, but watching to see what I was coming up to.

Once at the top of the hill, things didn’t get much easier. The downhill was just as technical, and this is where I came off my bike on my last trip out here.

After a kilometre of downhill, the path levels off. There are still plenty of run-offs across the path, so speed couldn’t really be brought in to play. 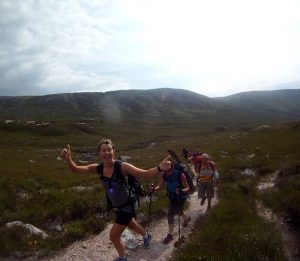 Cheryl leading the way and Deano bringing up the rear

A few kilometres later we stashed our bikes and started the walk in. The board was transferred from the trailer to my back. The pace was very steady and within an hour we were making our final ascent to Loch Etchachan.

The weather was glorious, and by the time we got to the loch, most people were ready for a dip. Loch Etchachan sits at over 3,000ft above sea level, 380m below the summit of Ben Macdui, (Scotland’s 2nd highest mountain). Even in late July there were still large patches of snow on Ben Macdui, and these were slowly melting down into the loch below, making the water a tad chilly. (As you can see from Wilfies’ face in the photo below.) 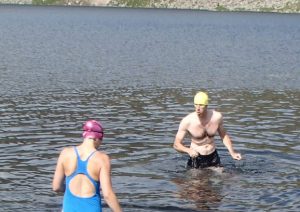 Wilfie reaches the point of no return

Once the board was pumped up and made ready, several of the team got into their swimmers and started to get acclimatised with Loch Etchachan. Whilst they did this, I went off for a SUP up the loch. The further I got into the middle of the loch, the windier it got. At one point it was quite a struggle to stop myself from being blown onto the wrong shore. 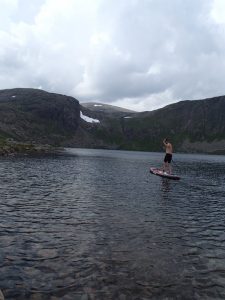 Deano paddles the first ever SUP on Loch Etchachan

By the time I got back to the others, several of them had decided to swim across the loch and asked me to safety-SUP for them. This turned out to be a wise call, as a couple of the team needed a wee lift back, due to the water being so cold and them having been in the water for so long. 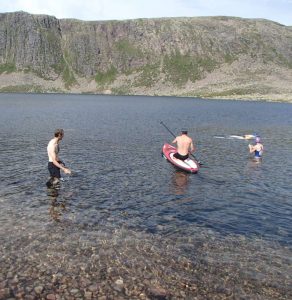 Safety SUPing for a very chilly swim across the loch

After the swim, Rhona and Mandy both took turns at SUPing on Loch Etchachan, and at the time of writing this, the 3 of us are the only people to have SUPed on the UK’s highest loch! 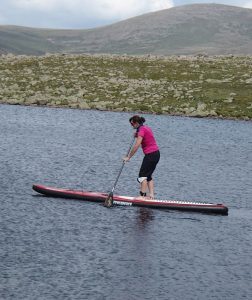 After her swim, Mandy has a SUP

With everyone dressed, warmed up, fed and watered, it was time to pack up the SUP and head back home.  Fraser took the SUP on his back for the walk out, and Wilfie biked the SUP back to the car park.

Once loaded up and having been bitten another few thousand times by the midges it was off to the pub for celebratory drink.

Although only 3 of us actually SUPed on Loch Etchachan, the trip would not have been possible without the whole team, and that is why I say that all 8 of us are the founding members of the “UK’s Highest SUP Club”!

This truly was a team effort and I would like to take this opportunity to thank and name the other 7 members of the team: 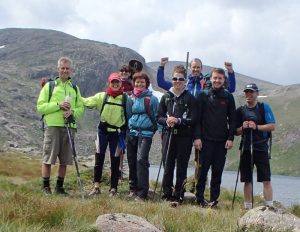