A wee while back, Airkix had invited me to come along and try some indoor skydiving at either their Milton Keynes or Manchester centres.  I had seen indoor skydiving on TV a couple of times, and thought it looked like a lot of fun.  As we live 5+ hours north of either location, a trip to Airkix would have to be combined with something else in the area.

Finding the Airkix centre in Manchester was very easy.  Following the directions given on their website, we got there with plenty of time to spare.  In fact enough time for us to order 2 cheese and ham toasties.

The café was on the 1st floor of the building, and next to it was a large glass cylindrical chamber.  The floor of the chamber was made up of a grid work of steel cable.  Below this must have been the massive wind generators that were to keep the fliers airborne.  When you looked up, you realised that the ceiling was missing.  It seemed that the next ceiling was on the equivalent of the 3rd floor.  This gave the chamber a height of around 20 metres. 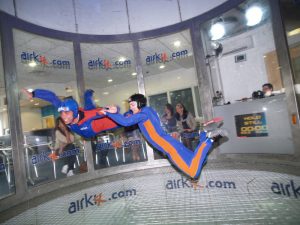 Whilst waiting for the food, we grabbed a seat next to the skydiving chamber, and watched the first batch of students going through the motions.  I couldn’t see a great deal, but Rho could.  I’m not sure what she saw them do in the chamber, but when our toasties arrived, she decided that it would be best, for her, if she only ate half of her toastie, as she didn’t want to throw up.  Whatever it was, I was not going to be put off.  I ate my full toastie, and thought to heck with the consequences!!

Luca was to be our instructor for our indoor skydiving session, and when it was our turn, he called us through to the classroom.  He made a quick introduction, and then put an instructional video on for us all to watch.  Rhona did her best to explain what was being shown.  A lot of the instructions given during your flight will be done via hand signals, as the noise from the giant hairdryer below you would make it almost impossible to hear what anyone said.  This was slightly worrying, as I obviously would not be able to see any hand signals.  What I did pick up was that we would all be getting two 1 minute flights.

Once the briefing was over, Luca took me to one side and explained how he would do the signals.  He firstly got me to lie face down, on a skydiving simulator trolley.  He placed my head, hands and legs in the correct position.  He then told me that instead of hand signals, he would communicate with me by holding my left hand.  If he was to hold and release my hand, in a pulsing motion, this would mean for me to bend my knees, and bring my legs up to a 90 degree angle.  If he was to hold my hand in a continuous motion, then I should straighten my legs.  Pulse to bend, hold to straighten.  All very straight forward.

After the briefing, we were given all-in-one jumpsuits, helmets, goggles, and ear plugs.  We were then taken through to the seated area of the chamber.  There were 6 of us in total, and I was to be number 5, and Rho number 6. 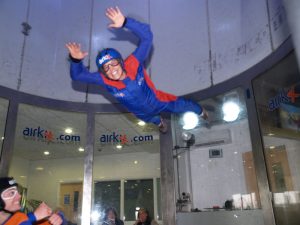 To enter the “windy” chamber, we were told to lean forward into Luca’s arms, and he would steer us into the centre of the chamber, whilst the wind from below kept us in the air.

The first 4 seemed to go really well.  Then it was my turn.  Luca guided me to the entrance, then touched my back to signal for me to lean forward.  As I did this, my feet rose behind me, and I was now hovering above the ground.  I was at about the height of Luca’s chest, and he was now able to steer me into the centre of the chamber.  The noise was deafening, and the goggles took away what little sight I had left.  It was all down to touch now.  I assumed the position, with my elbows bent, and my hands in front of my face.  (They would work like bumpers, if I was to go towards anything).  I was a little bit off balance, but not too bad.  However, when Luca grabbed my hand and pulsed it, I couldn’t remember what I was supposed to do.  A combination of the loud noise, adrenaline, and possibly age turned my brain to mush.  “Pulse?”  “Now was that straighten or bend my legs?”  “What are my legs doing now?”  “They’re kind of bent.”  “So should I straighten them more or bend them more?”  Crash, I bounced off the wall.  As Luca still had hold of me, it was more of a slight bump than a crash, but as my brain was still trying to work out what my legs should be doing, it was still a surprise.

After a few more bumps, Luca seemed to be directing me towards the wall.  I put my hands out and felt that the wall had disappeared.  What was this hole.  I groped my way down either side, and tried to work out what I was feeling.  As I was doing this, Luca seemed to be trying to push me through this opening.  Then it donned on me, this was the door, and my first minute was up!  Noise, adrenaline or age, something was certainly confusing my brain.

Rho went next, and she told me afterwards that she had a great time. 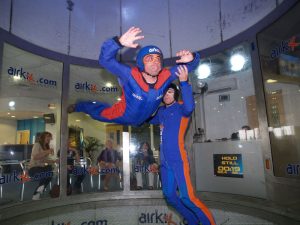 After the others had had their second minute, it was my turn again.  I still couldn’t remember if pulse was straight or bent, but I just had to go for it.  As an added extra, I was going to do a “high flier” at the end of this minute.

This minute was pretty much like the first minute, with me not remembering what to do with my legs, but having a fantastic time doing it!  I managed to get the odd bit right, and thoroughly enjoyed it.  I had been told to try to keep a smile on my face, as photographs would be taken.  However, with the wind blowing up at you, holding a smile was a lot harder than it sounded.  As I tried to grin, the wind would grab my face, and I could feel my lips and cheeks vibrate.  I was also aware on the odd occasion of moisture from my mouth smearing across my face.  (But maybe that is too much information!)

As my second minute came to an end, it was now time for my “high flyer”.  Luca held on to one arm and one leg, and started to spin me around slowly.  Whilst doing this, he leaned forward, which allowed the wind to grab him too.  We were now both hovering.  A few seconds later, we seemed to take off, and head for the ceiling above us.  As we came close to the top, Luca changed his position, and we plummeted towards the ground.  Just a few feet away from the ground we stopped again, hovered, and then took off!  This was absolutely amazing.  In fact, for me it was the highlight of the whole experience!!  Rising so quickly, then just dropping towards the ground.  Wow!

Once everyone had done everything they had asked for, Luca showed us what the professionals can do in the chamber.  He spun upside down, ran up the walls, around the walls, flew skywards, then dropped like a stone.  Absolutely amazing. 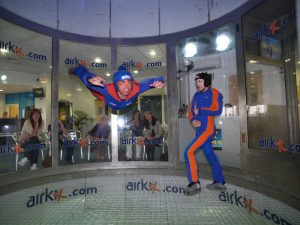 Unfortunately my limited literary skills do not do this experience justice, so hope that the video footage fills in some of the blanks.

If like me, you’ve seen it on the telly but never tried it, get yourself along there and give it a go.  You will not be disappointed.

I would like to take this opportunity to thank Airkix, from both myself and Rhona, for a wonderful time.  Thank you!

(All photos and video footage is courtesy of Airkix, Manchester.)