Rhona and I have done a fair bit of sandboarding in North Devon, where the dunes were about 10 – 20 metres high.

We’d always said that we had wanted to do some big dunes, so whilst in Western Australia, in 2006, we got our chance. 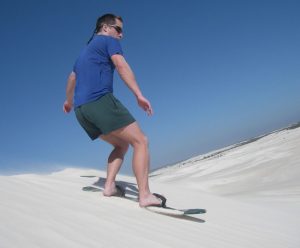 We followed signs from Perth, and after a few hours of wrong turnings, dead ends, etc, we eventually arrived in Lancelin.  It was a small town with a petrol station, a well hidden Tourist Information centre and a few small shops.  It was from one of these shops that we were able to hire our sandboards.  They had a couple of different types to choose from, which was a little confusing.  When we had done sandboarding in the past, we had used a converted snowboard, so we chose the style of sandboard which looked closest to this.

We hired a sandboard each, stocked up on essentials, (ice cream and bottles of ice cold water), and got directions to the dunes.  It was around 2pm, so we’d missed the hottest part of the day.  However, it was still extremely hot.  I can’t say exactly what the temperature was, but I reckon it was in the late 30s or early 40s (ºC).  Coming from Scotland, where a Summer’s day is anything over 15 ºC, you can imagine how this felt:! 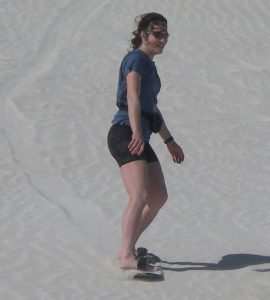 We drove our rental car out of town following the directions we had been given.  Within 10 minutes, we were off-roading.  Our car wasn’t really designed for this, but then it was a rental!!  We drove along this sandy, bumpy track for another few hundred metres, and then all of a sudden, we came across this range of giant sand dunes!!  They must have all been over 60 metres each.  They were massive.

We quickly parked up, finished our ice creams and sank a bottle of cold water.  It was then out, into the searing heat and get our kit sorted. 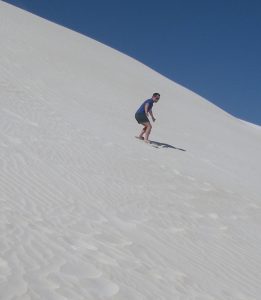 Within a few minutes, we had made our way to the bottom of our chosen dune.  It was massive!!  There was a German couple sandboarding on one section of the dune, so we chose a section about 100 metres away from them.  Like a boy entering a toy shop I grabbed my sandboard and sprinted off to get my first run down these monster dunes.  (Do many boys entering a toy shop grab a sandboard?)

However, within a few seconds, my run had turned into a walk, and then a crawl.  A combination of burning sun and soft sand had taken the wind out of me, and I wasn’t even half way up the dune!!  From this point onwards, I decided that the dune wasn’t going anywhere, so I should just take my time and get to the top nice and steady.

When I finally got to the top, it was amazing.  Rhona joined me and we both just sat there for a few minutes planning our routes and taking in the view.  (In reality, we were both trying to get our breath back, so as to enjoy the trip down.) 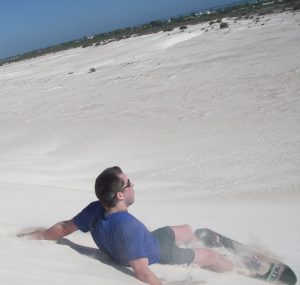 Once our heart rate had returned to normal, we stepped into the toe bindings of our sandboards and off we went.  The slopes were so steep, that we didn’t have to go far before we were really motoring!!  Crash, thump, roll, splat!!  My first run came to an acrobatic stop.  Wow, I had only travelled 15 metres on my board, but managed to travel the remaining 50 metres without it, rolling, diving, and finally crumpling in a heap at the bottom.  Awesome!!

Over the next 2 hours we managed to master our sandboarding skills.  Well, when I say “we”, I mean Rhona managed to master the skill.  She seemed to be a natural boarder, where as I was a natural crash and roller!!  Rhona took her time and mastered each step.  I, as usual, wanted to do the fastest and longest run, but forgot to learn the basics first.  Ah well, it’s all part of the fun. 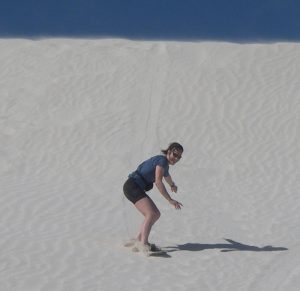 We had a fantastic couple of hours, and before we knew it, it was time to return the boards.  We found a toilet block in Lancelin, which had a shower, and washed a mountain of sand from our bodies.  However, for the next several days, every time I moved my body, another load of sand would fall from somewhere on my body.

So my advice to you is, that if you ever make it to Western Australia and you fancy a go at sandboarding, get yourself off to Lancelin, as judging from my experience, the sand dunes aren’t going to be there much longer if every visitor secretes as much sand around their body as I did!!