In November 2004, Rhona and I took a holiday in Ecuador. Obviously, we could not go all the way out there without finding something to get the adrenaline pumping! Whilst in Banos, we came across lots of companies offering canyonning. Unfortunately, some of the companies we approached were unwilling to let me do the trips I wanted (due to the blind thing).

Anyway after searching, we came across a company called “Exodotours” who would be happy to take me on a half day trip! We had teamed up with a great couple from Oz, Amy and Tony, earlier in the week and they were also looking for some fun, so we booked up together. 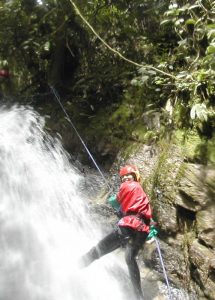 Rhona goes over the edge

When we arrived at the shop to get kitted out, we were given a wetsuit long john, each, a helmet, dry cag and a pair of shoes. I already had my “5 10s” – my favourite shoes for water sports. These boots stick to rock, like poo sticks to a bears bum! 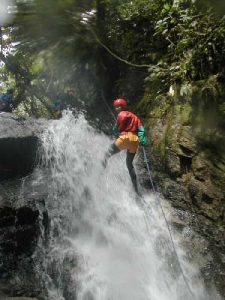 Once dressed, we were lead to the bus, which already had 5 people in it. This made a total of 9 clients and 2 guides – William and Armundo. We then headed north-east along the main road between Banos and Puyo. After travelling for around 15 minutes, through a couple of tunnels, we pulled off the road and de-bussed. From here we took a steep walk to our put-in point, around 100 metres above us. 100 metres may not sound too bad, but when you are dressed head to toe in neoprene, carrying your cag, life jacket and helmet, and the temperature is around 35 degrees centigrade, it seemed a long way!! 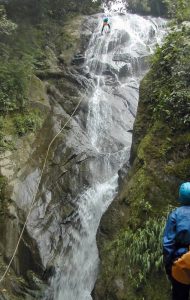 Tony does the big one!

20 minutes later, we were all taking our turn to stand under a 3 metre waterfall, taking photos and generally cooling down! From here it was time to learn how to abseil. William took us to a small 2 metre waterfall and talked us through the technique we were about to use for this session of canyonning. His main advice, once we were on the rope and in the right position, was to “open your legs” and “take it slowly”. 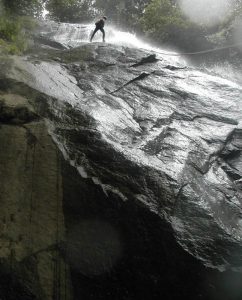 Is it Spiderman? Oh no, it’s just Deano

One at a time we rappelled down this first waterfall, correcting our technique as we went. We were then taken down a few more waterfalls ranging in height from around 4 metres to around 10 metres. These all went very well with no major problems. Apparently the view from these waterfalls was amazing. I couldn’t see it, but people were saying that we were around 200-300 metres above the valley floor and they could see the river below us and the jungle opposite. It sounded very impressive 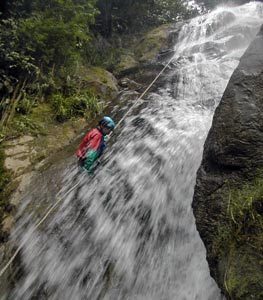 Anyway, we had now made our way down to our last waterfall of the day. This was an almost vertical descent of around 45 metres! There was not enough water to make it too dangerous, but there was enough to make our route pretty slippery!! (I’m glad I had my 5-10s!!) One at a time we went over the edge, with our legs open and taking it slowly. The first 2 or 3 metres were at a 45 degree angle, which was very easy. From here, the next 40+ metres were straight down. As the rope was soaked (by the waterfalls), it meant that the rope was extremely heavy. This meant that we had to pull each length of rope, from below us, through our equipment as we rappelled. (None of this easy slide stuff.) This was not that hard for most of the heavier guys, but some of the lighter ones found this a little harder. 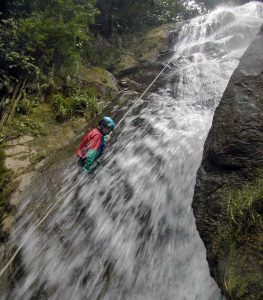 On the way down everyone took a chance to stop and admire the scenery. Even I did this, although I couldn’t see much. It was just nice to dangle there with the water flowing past you and enjoying the sensation! At the bottom we unclipped and cheered the next person on. 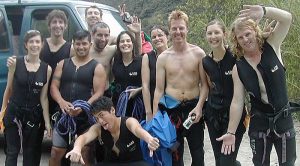 Group photo – we all made it!

After that it was back to the bus and home to Banos, for a night out at Williams bar, with our first cocktail of the night on the house!! Result!! Half a dozen cocktails later our 45 metre waterfall had grown and the danger had much increased!! An absolutely fabulous canyonning (or more accurately “waterfall rappelling”) trip and not to be missed if you ever make it to Banos!

More recently the sport of waterfall abseiling has become known as aquaseilling.  This was my first go at aquaseiling, but as you will see on this site, it certainly won’t be my last! 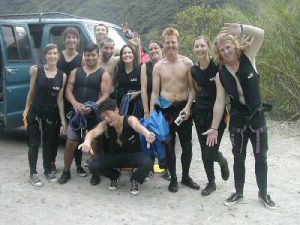