Before I go any further, I’d like to say that the blame for this adventure lies totally at the feet of Cathy Winterton!

In November 2014, Rhona and I met up with our friends Patrick and Cathy Winterton for a wee paddle on the tiny Loch Ba, near the Bridge of Orchy.  (You can read about it on the SUP Blog.) 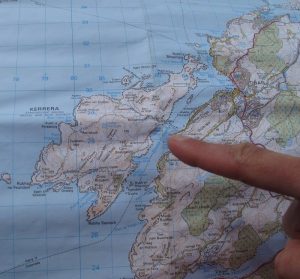 After the paddle, in the pub, Cathy and I were talking about SUPing adventures, and Cathy let it slip that she had been planning to paddle around her local island Kerrera, a few hundred yards out from Oban.  Cathy and I had paddled around it, together, in 2013 in the Oban Sea Kayak Race, (and I had also paddled it in 2012 with Patrick).  In a two man sea kayak it had taken around two and a half hours.

As she hadn’t got around to SUPing Kerrera in 2014, I suggested that she go for it this year, 2015, and if she didn’t mind, could I join her?  As pub adventures tend to be, it was loosely agreed upon, but no dates were set.

I phoned Cathy early in 2015 to remind her of our chat and get a date.  After consulting our diaries, the weekend of 30/31 May was set. 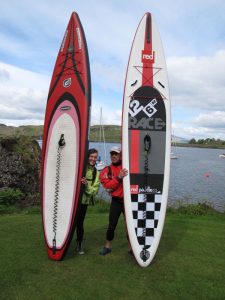 Now I have done quite a lot of SUPing over the last 12 months, but 99% of it had been on lochs.  As Kerrera is an island, this would mean I’d need to get some sea training in.  Luckily for me I was able to get some done in Mallorca, Devon, and Barcelona throughout April and May.  It wasn’t a huge amount of sea training, but it was something.

The weekend of 30/31 of May wasn’t looking to be too great for SUPing, but what the heck, we’d give it a go.  The weather forecast told us that there would be a strong wind in the morning, but it should start to drop around 10am.  We figured if we started our trip at 10.45, the wind should have dropped enough to allow us to paddle south into it, and then use it on our return trip up the far side of the island.  As tends to be the case, the weather decided it had it’s own plans.

Cathy and I launched our SUPs just next to the Oban Sailing Club, and started our journey south, down the Sound.  The first 20 minutes were fine, then as we started to get out into the Sound, the wind seemed to pick up.  Judging by the weather report, we had reckoned that if we crossed the sound and paddled down the east side of Kerrera, this should protect us from the wind. 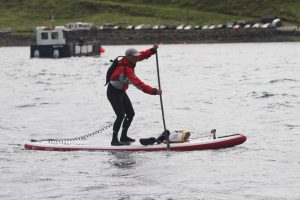 WRONG!  We slowly battled our way across the Sound, trying not to get blow north.  As we reached the east coast of Kerrera we realised that there was pretty much no shelter from the wind, and in fact it may have been slightly better had we stayed on the side we had started from.  We met up with Patrick, Rhona, Faraid, and Stumpy at the south Kerrera ferry slipway and had a brief chat with them.  We talked through our options and decided that we would stick with this plan, and whenever possible, we’d hug the east coast, and try to get some protection from the wind.

Another of our plans had been to try to stop every hour or so for a few minutes to take on food, water, etc, and just get a wee rest.  Unfortunately the weather wasn’t going to let us do that.  It took us 2 hours just to get down towards the south edge of the island, and whenever we tried to stop, we were blown backwards.  (At this point, we both ended up kneeling down to paddle, as when we stood up, we were acting as human sails.)  After 20 minutes of kneeling, Cathy thought we may not be moving forward whilst paddling, so gave herself a couple of markers and then timed a 3 minute paddle.  Sure enough, for that 3 minutes, and possible 2 or more before, we were paddling but going nowhere.  This meant we had to really dig deep and put more effort in, just to slightly move forward. 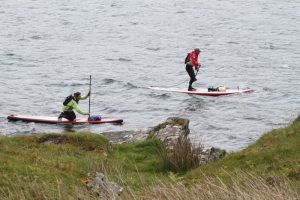 The wind had been coming from the south as we paddled down the Sound, but as we rounded the corner and changed our direction, (to paddle along the south shore), so did the wind.  Instead of coming directly from our left, it was now coming from our 10 o’clock, not only pushing is in towards the south shore of Kerrera, but also back towards where we had just left.

The waves were pretty big at this point, and on several occasions, I lost sight of Cathy as she disappeared behind the waves.  There was no chance of standing up at this point, although Cathy did bravely try.  (Unfortunately Patrick, Rhona, et al, couldn’t get down to the south edge of Kerrera in time, so we don’t have any pics to show the size of the waves, so you’ll just have to take my word for it.  They were BIG!) 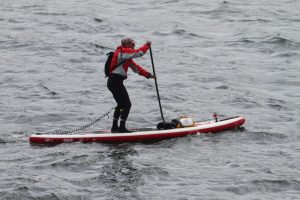 After an hour of paddling along the south shore, we started to round the south west corner of Kerrera, and the wind was now behind us.  I can’t speak for Cathy, but I know by this point I was really struggling.  We had been battling against the wind, the waves and the tide for a little over 3 hours, and I was knackered.  We both needed to get some food on board and take a wee break.

As Cathy looked for a suitable landing spot, I heard Patrick’s voice.  The gang were up on a hill looking down on us.  This was a wee morale booster, and even more so when they made their way down to the beach we were resting at. 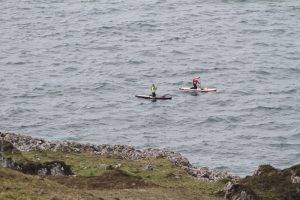 Coming on to the west coast of Kerrera after 3 hours of hard paddling, without a break – photo courtesy of Patrick Winterton

We took a 30 minute break and sorted ourselves out.  We then had a wee chat with the others, and then it was back on the boards.

With the wind behind, we cruised up to the north end of Kerrera in a little over an hour, before paddling along the north shore.  Cathy knew of a point that only at high tide you can paddle through a gap between Kerrera and a tiny wee island.  We discussed the idea of doing this, but then thought we had better stick to going around the wee island too, as we didn’t want somebody telling us we hadn’t paddled the full distance. 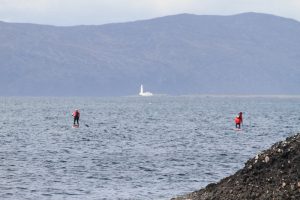 Heading north after a break, (with Lismore lighthouse in the distance) – photo courtesy of Patrick Winterton

We had set off at 10.45, and at 16.30, Cathy spotted our landing spot.  10 minutes later, we were coming in to the beach, where Patrick, Faraid, Rhona, and Stumpy were all waiting for us.

What a mission.  It had been one heck of a paddle, but wow, I’m so glad we did it.  It was a little under 20km, and I have done many 20km paddles, but never have I done one like that!  I have made some enquiries, and it looks like Cathy and I are the first people to have circumnavigated Kerrera on SUPs. Yee  ha!

The video above was taken after 6 hours and 20km of some of the lumpiest water I have ever SUPed on.  Patrick had wanted to take a “finish” photo, and we were on the flattest water of the day.
Normally when I fall backwards, I’m able to lay back on the board, take a second and then sit back up.  However, this time I forgot I was wearing a water bladder on my back, and instead of a nice flat back, I had a rounded one.  Hence the slow motion roll-over.