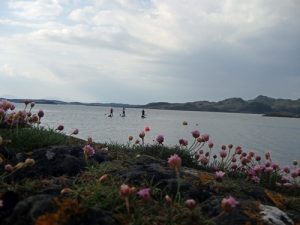 Approaching Crinon on Day 1 after paddling 30 miles from Ganavan, and battling Dorus Mor whirlpools just over an hour earlier.

Just after 9am on Thursday the 12th of May, we – Ian Cormack (SUP Ecosse), Allistair Swinsco (Northwest Paddleboards), and me – set off from Ganavan beach, (just north of Oban), to begin our 150km paddle along the Argyll Sea Kayak Trail, (ASKT).

We were out to set a double first; to become the first people to paddle the full route on stand up paddle-boards, and for me to be the first blind person to do this.
We were successful in both, finishing the paddle, in Helensburgh, on Sunday the 15th of May, shadowed on land by our trusted support team of Alison Rennie, Rhona Dunbar, and Stumpy the dog.
Mother Nature very much played a role in this adventure.

Although the weather remained dry, it was not always kind to us, throwing winds of up to 30mph at us from every direction, but behind.
The sea also had its’ own little surprises including big lumps, (from every direction), and crazy whirlpools which seemed to appear from nowhere.
The boys also saw lots of seals and a family of dolphins. 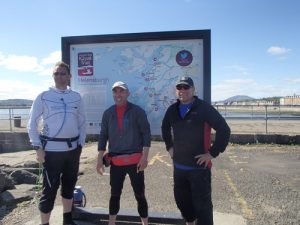 Day 4 at the end of the AASKT in Helensburgh.